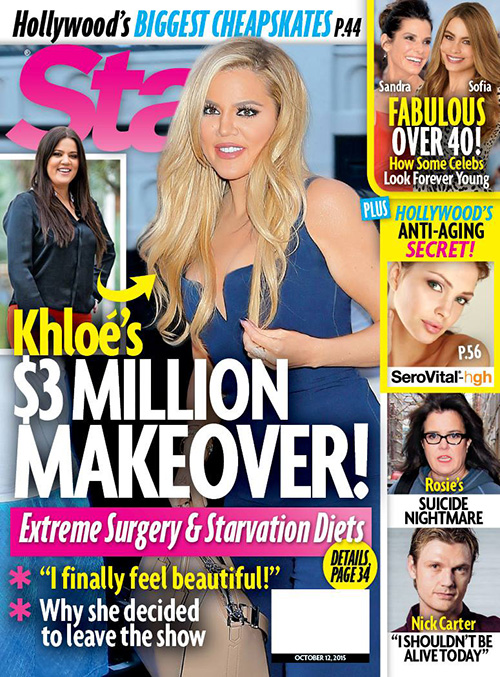 Khloe Kardashian looks like a new woman lately and a recent Star report suggests that is exactly what she has become. It’s no secret that the Kardashians will surgically enhance any body part not deemed beautiful enough but is that really how Khloe got her groove back?

Khloe has always been called the ugliest Kardashian and that really has to take it’s toll over time. Maybe that’s why the youngest of the Kardashian sisters has been working so hard over the past year to completely transform herself.

According to Khloe, she has been able to change her shape using heavy workouts, a balanced diet and, of course, she is also wearing one of those waist trainers that everyone seems to be raving about. Even Khloe Kardashian’s website and app boast special workouts that Khloe used to get in shape in order to tempt users into paying for the service.

Today, Star Magazine put out a new issue and Khloe Kardashian is on the cover. The gossip rag is claiming that Khloe’s workout plan might not be so honest after all. Instead Star is claiming that Khloe has had a lot of work done, to the tune of about $3 million. While the mag claims that some of that money was spent on special foods and personal trainers, the bulk of it was spent on plastic surgery.

There are claims that Khloe has had everything worked on including a nose job, breast implants and a butt lift. The most shocking claim is that Khloe underwent surgery to have a gastric band placed, forcing the reality star to eat less food. Khloe may have been the bigger sister but she was nowhere near eligible for weight loss surgery. Then again, the Kardashians tend to get what they want and normal rules don’t apply.

To be honest, Khloe is starting to look like a contestant from that old reality show, “The Swan.” Remember that show where they would take some really awkward looking women who let themselves go and then transform them with insane amounts of plastic surgery, dental implants and hair extensions.

Some outlets are saying that the Star report is false and that there is no way Khloe would have that much work done. To that we ask, have you seen her sisters?