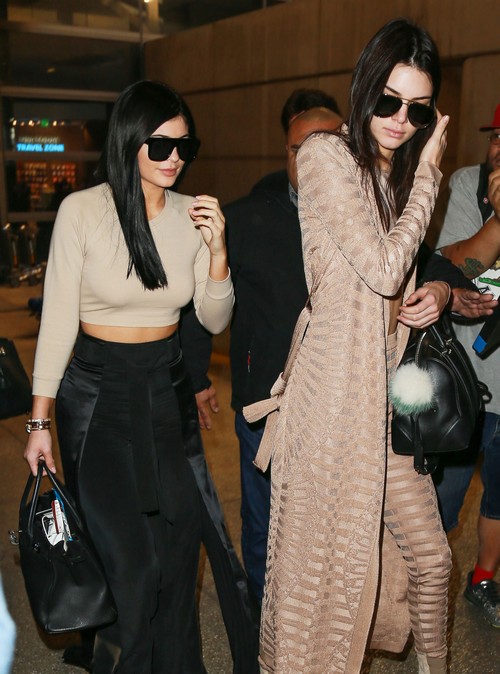 Is pregnant Kim Kardashian devastated that Kanye West has been banned from Kris Jenner’s home? It seems as if Kris refused to let Kim and Kanye move in with her while Kardashian and West completed yet another remodel on their mansion.

Kris wasn’t happy when Kim asked – demanded? – that the momager allow the West family to move into Kris’s house in order for contractors to complete renovations on bathrooms and Kim and Kanye’s bedroom.

In a clip from an upcoming episode of “Keeping Up With the Kardashians” shared by E!, Kylie Jenner, Kris and Kim are gathered in Kris’s kitchen when Kim when asks if Jenner would like a roommate. Kris has an incredulous look on her face and says, “I would have to make a run for it. Sayonara!” Then Kim has the nerve to say that the West family should move into Kylie Jenner’s new place.

Kylie isn’t having any of that! The fashion model tells Kim she’d rather stab herself. OUCH! Kim tells Kylie, “I’d do it for you.” Then Kim Kardashian has the nerve to say, “I’m going to ask Kanye if he’s open to that idea,” to which Kylie replies, “Nobody is staying at my house.”

Why would anyone undertake a remodel of their home while pregnant knowing it would take at least a few months to complete? Kanye and Kim already remodeled the $20 million Hidden Hills mansion once! Kim did move in with Kris in September, but Kanye didn’t.

This move reportedly caused troubles in the Kardashian-West marriage and Kim moved back to the couple’s mansion a short time later. But Kim’s shoes have taken up residency in Kris’s garage according to a video posted on Kardashian’s blog.

Is it Kanye West that Kris Jenner and Kylie Jenner don’t want living in their homes? Kylie probably doesn’t want anyone living in her brand new house. It doesn’t appear that Kylie had moved into the house at the time the episode of “Keeping Up With The Kardashians” was filmed.

Kim lived with Kris while she pregnant with daughter North West in 2013. Did Kim expect that Kris would jump at the chance to live with a pregnant Kim Kardashian again? And Kanye really hasn’t been a welcome figure in the Jenner home for a visit, let alone to live for an extended period of time.

Maybe Kris Jenner doesn’t mind Kim and North bunking with her, but it seems Kanye West is another story. Fans won’t know until they tune in and watch this episode of “KUWTK” – or Kris, Kim and Kylie may gloss over the matter entirely.

Let us know what you think in the comments section below and come back to CDL for Kardashian news, updates, rumors and gossip.

Kendall and Kylie Jenner arriving on a flight at LAX airport in Los Angeles, California on November 19, 2015. The pair are returning from Australia where they attended a launch of their clothing range ‘Kendall + Kylie.’ FameFlynet