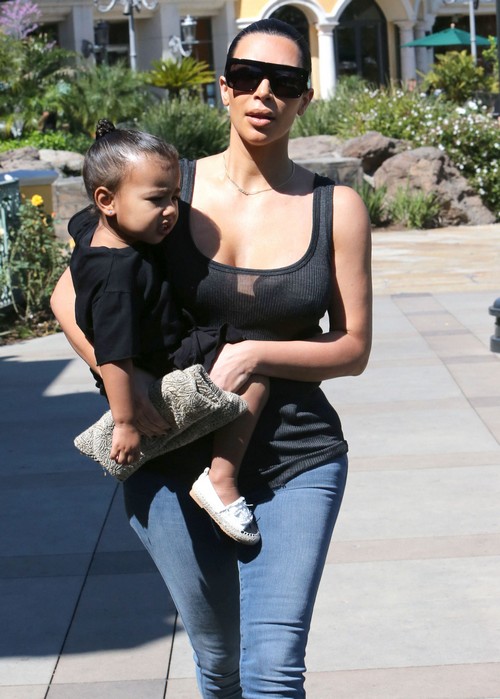 Kim Kardashian and Kanye West are getting a divorce – it’s not a matter of “if” but “when.” Kim and Kanye’s marriage was over months ago, but the Keeping Up With The Kardashians star and crazy rapper have been carrying on their showmance for publicity reasons, that’s what happens when you brand yourselves as a couple. When Kim stopped wearing her wedding ring and met with divorce lawyers the reality TV star realized that her name alone was not half as powerful as “Kimye” in the media – so she coerced and convinced Kanye to stay with her to help both of their careers.

Kim and Kanye’s sham of a marriage has reached the end of its line though – with Kim’s brother Rob Kardashian and Kanye’s ex Amber Rose slinging mud at them, combined with the stresses of their fertility woes, a divorce is inevitable at this point. But, being the smart business woman that Kim is – she knows that getting custody of North West will keep her relevant and in the headlines. So, she has stepped her mom game up this month so that when the divorce is final and she and Kanye begin battling over custody of North, she will have a leg to stand on in court.

It’s no secret that Kim Kardashian isn’t exactly a hands-on mom, but recently she has been dragging North all over for photo-ops. Just last week Kim was photographed dressed down, almost like a real mom, and taking North to dance class…all by herself! And, she even dragged her nephew Mason along for good measure, because juggling not one but two children at once makes you a total super mom. On Saturday March 28th Kim continued her tour as super mom, and too her daughter North West to the movies with her sister Kourtney and her children – they all attended an afternoon showing of “Home” in Calabasas.

It’s no mystery that Kim Kardashian and Kanye West are getting a divorce, but we are all dying to see which parent will get custody of cash cow North West. The thought of Kim or Kanye raising a toddler by themselves is terrifying…to say the least. If you were a family court judge, who would you give sole custody to? Crazy Kanye or self-obsessed Kim? Let us know what you think in the comments below!