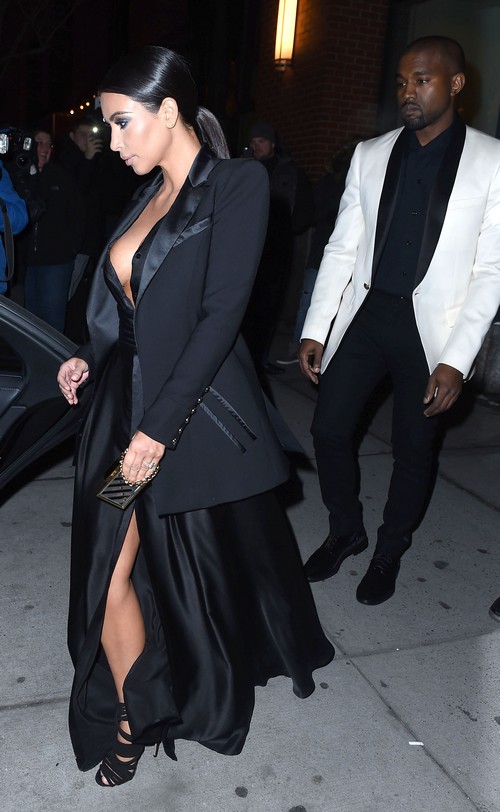 Tensions are high for Kim Kardashian and Kanye West as Kanye forces fashion advice on Kim: the body language in the photos tells it all—divorce is on the horizon!

The tension between Kim Kardashian and hubby Kanye West was quite noticeable by looking at the body language between the two after arguing about Kanye’s constant forced advice for Kim, and it is pushing her even closer to the point of divorce. Kanye seems to think he knows what’s best when it comes to what his wife should wear. She often likes his advice, even tweeting about the two going through her wardrobe together the other night as she searched for exciting outfits, but she often feels stifled because he always criticizes her choices or outfits she puts together on her own. Kanye always tells her that he’s studied fashion, so he knows best. Big words coming from a man who mainly dons leather pants with a sweatshirt and women’s boots.

Kim Kardashian was incensed however, when he kept pushing for her to wear a leather mini the other day in the frigid New York weather. Her legs were freezing and she looked silly for wearing the small skirt with strappy heals in the middle of winter, but she took his advice after about five outfit changes. For Kim, every outing is a carefully planned event and sometimes she struggles over what to wear. She has even gotten to the point of tears after arguments with Kanye West over what she wears. He constantly wants to coordinate their wardrobe. She agrees to some extent that it can be visually appealing, but finds it weird that her man wants to dress alike every time they go out. One of the main reasons Kim wants a divorce is because there is no chemistry between the two anymore, and she can’t stand his feminine ways. She gets even more upset when she is ready to leave after choosing her attire, only to have her choice bashed by Kanye. It is a definite source of contention between the two of them.

Later, during their New York trip, the couple attended John Legend’s birthday party. Kanye West insisted on picking Kim Kardahsian’s outfits before they left to New York. She hadn’t thought about how cold it would be and ended up, again, being mocked for wearing a sheer leg-flaunting, cleavage-baring dress in the middle of winter in New York. And if you thought the weather was cold in New York, check out the body language between Kim Kardashian and Kanye West both outside and inside the party. The two never hold hands, never have their arms around one another, and never do they look remotely interested in one another. Kim chose to hold her clutch and, what looks like, two cell phones in her left hand…to ensure it was not free to hold hubby Kanye’s hand. Her other free hand could have easily held the items, allowing her to free up the hand closest to Kanye so they’d be able to show some affection for one another. Kim was all about the PDA when she was with Reggie Bush, so it sure seems odd that she wouldn’t show the same affection for her current husband.

Kanye may think his fashion advice is helpful, but his controlling ways are wearing on Kim and pushing her one step closer to filing for divorce.