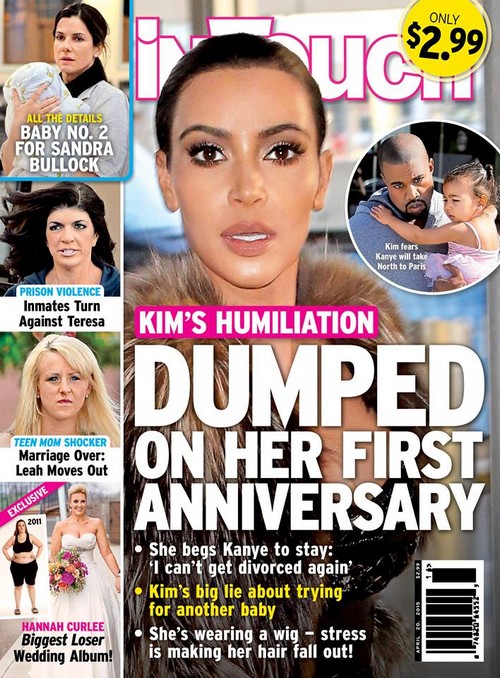 Kim Kardashian and Kanye West are getting a divorce, despite their desperate attempts to keep their “Kimye” showmance alive – their secret is out. CDL has been reporting for weeks now that Kim and Kanye’s marriage is over, and now the April 20 cover of In Touch Magazine is confirming the Keeping Up With The Kardashian’s star’s divorce from the crazy rapper.

This week’s cover of In Touch Magazine features a photo of Kim Kardashian and the headline screams, “Kim’s Humiliation: Dumped On Her First Anniversary. She begs Kanye to stay, ‘I can’t get divorced again.’ Kim’s big lie about trying for another baby. She is wearing a wig – stress is making her hair fall out.” Obviously Kim Kardashian doesn’t want to get divorced again, the media has turned her list of marriages in to a complete mockery. And, considering the damage Kris Humphries tried to do to her image and family’s TV show in court – we can see why she doesn’t want to go through it again.

The leading reason behind Kim Kardashian and Kanye West’s divorce is Kim’s fertility woes, she recently visited a doctor on Keeping Up With The Kardashians and learned that because of complications in her first pregnancy the odds of her conceiving again are slim to none. And, if Kim does get miraculously pregnant, it will put her in serious danger and will have to have emergency surgery to have her uterus removed immediately following birth. Kanye wants another son – and he doesn’t care if Kim has to die giving him one. So you can see how the predicament has caused some tension between the couple.

Are you surprised that Kim Kardashian and Kanye West are getting a divorce, or are you just surprised that they lasted this long? What “big lie” do you think Kim told about getting pregnant? Is she faking her medical condition so that she doesn’t have to ruin her body and have another baby? Let us know what you think in the comments below!