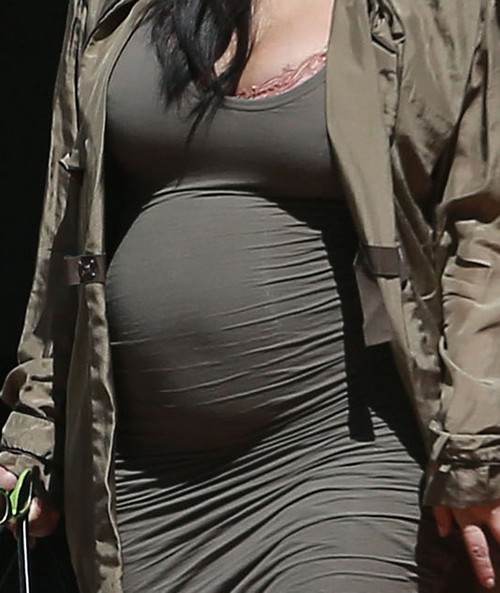 Is Kanye West filing for divorce? Kim Kardashian just couldn’t take it anymore, the reality TV queen took to social media and shared a completely naked and unedited photo of her posing and flaunting her baby bump. The hormonal Keeping Up With The Kardashians star was sick and tired of reading conspiracy theories about her faking her pregnancy, and she snapped and posted the photo earlier this week. Kim Kardashian was successful, she proved the world wrong – but her plan backfired, and her husband Kanye West is disgusted and furious with his wife.

Kim Kardashian was offered a slew of magazine covers and photo shoots when it was revealed she was pregnant – everyone wanted the naked baby bump pictures of the Keeping Up With The Kardashians star. But, her husband Kanye West nixed the idea – he thought that naked pregnant pictures were cliché and “overdone.” And, the rapper is a realist, he knows that the majority of the people that gobble up naked pictures of his wife look at her in a sexual manner, after all she has a porno. The thought of men getting turned on by his pregnant wife while his unborn son was in her stomach made him queasy.

Kanye West made it very clear to Kim that she wouldn’t be posing pregnant and nude, unless he was able to convince a high-profile magazine like Vogue to feature her. Not only did Kim completely disregard her husband’s wishes, but she screwed up any future Kimye naked baby bump deals that he was working on for her. No magazine is going to pay for pictures of Kim pregnant and naked when you can see them all over the internet for free.

A source close to the Kardashian clan dished to CDL, “Kanye is furious. He has barely spoken to Kim since she posted the naked picture. She is freeing out, and confessed to some of her pals that they were already on the verge of a divorce, and this might be the final straw. Image is everything to Kanye, and when Kim messed with their image he flips his lid.”

Kanye West knew what he was getting when he married Kim Kardashian, it sound like it really has nothing to do with people seeing his wife naked and everything to do with his control issues. Nothing angers the rapper more than Kim not following his orders. Kim and Kanye have built the Kimye brand together, and it would be almost foolish to break-up now. But, Kim may have pushed him to his breaking point with her latest naked photo, anything is possible at this point. Do you think that Kanye is overreacting? Or did Kim go too far? Will he really file for divorce? Let us know what you think in the comments below!

Kim Kardashian takes her daughter North to a birthday party in Beverly Hills, California on August 15, 2015. Kim continues her ridiculous pregnant fashion of a trench coat and a tight dress every time she leaves the house. FameFlynet