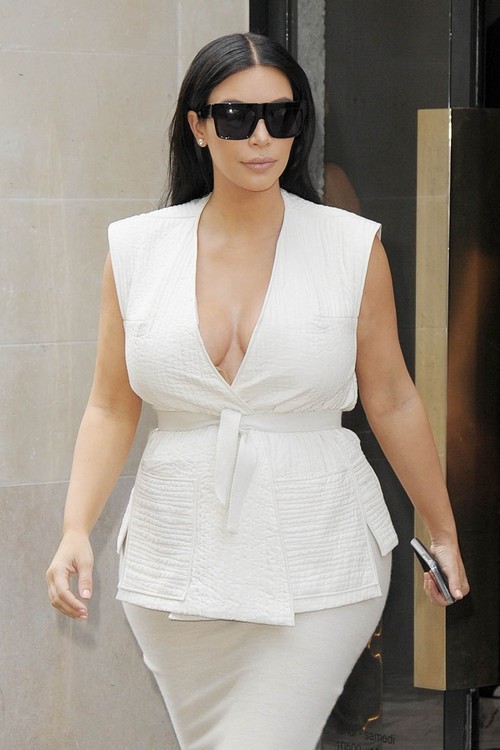 If ever there was a time that the Kim Kardashian and Kanye West divorce rumors were true – it’s now. Just like her previous pregnancy with North West, Kim Kardashian has become a jealous and insecure mess since she began putting on tons of weight and trying to cram her baby bump in to her latex mini skirts. And, much to Kim’s dismay her nemesis Amber Rose seems to be getting hotter than ever – and Kim’s husband Kanye West has definitely noticed.

Would Kanye ever cheat on his pregnant wife Kim with his ex-girlfriend Amber Rose? Well, after Kanye blasted Amber during an interview and said he had to take “30 showers” before Kim would hook up with him because he has been with Amber – we would have said “no.” But, it looks like Kanye West still has a thing for Amber after all. Right after Kim Kardashian first announced her second pregnancy, Kanye was spotted at a party with Amber – and Kim Kardashian flipped a lip, even though Kanye insisted he had no idea his ex was going to be at the party.

It looks like Kim’s instincts weren’t that far off, because Amber has been sending Kanye nude pictures! And, he didn’t delete them, he saved them …

Kim Kardashian is threatening to file divorce papers against her husband Kanye West, and she means business after she found nude pictures of Amber Rose on his computer. According to a new report from Closer Magazine, “Kim found Kanye looking at Amber’s Instagram page and went ballistic. It’s really damaged her confidence. He told her she was being ridiculous. She then went to his compute and found he still had old intimated pics and videos from their relationship. Kim was sobbing and confronted Kanye, telling him he had betrayed her, but he reassured her none of it was a big deal.”

Does anyone else feel like this is deja-vu? Why is it every time Kim Kardashian gets pregnant, Kanye West starts getting linked to his ex-girlfriend Amber Rose? Do you think he is cheating on his pregnant wife? Will Kim really file the divorce papers? Let us know what you think in the comments below!

Kim Kardashian goes shopping at the Givenchy store in Paris, France on July 21, 2015. The star of ‘Keeping Up With The Kardashians’ hid her baby bump under a sleeveless white top and a pale beige skirt, along with nude high-heeled sandals and dark sunglasses. FameFlynet