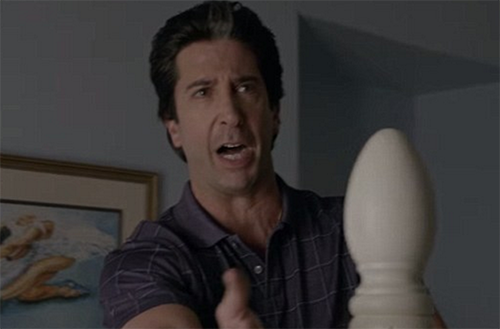 Kim Kardashian is furious that FX is using her to promote the upcoming American Crime Story: The People v. O.J. Simpson. A new trailer for the true crime anthology tells the story of how O.J. Simpson threatened to kill himself in Kardashian’s childhood bedroom. Kim couldn’t be more upset that the chilling story is not only being retold again but that FX is obviously using her fame to promote the show.

There is an old story that Robert Kardashian walked in on O.J. Simpson as he considered killing himself in Kim’s bedroom. In the American Crime Story clip, the scene unfolded as Robert commanded his client, “Don’t kill yourself in Kimmy’s bedroom. Give me the gun.” While that story is true according to author Lawrence Schiller, there’s no doubt that Kim Kardashian would prefer the story be left alone.

For starters, the O.J, Simpson suicide attempt story is relatively new. It’s been 20 years since the deaths of Nicole Brown Simpson and Ronald Goldman but the revelation of Simpson being so close to killing himself is a new one and is definitely something Kim would love to forget. A source close to the Calabasas reality star claims that Kim hates hearing about the creepy story and wishes it would go away. Of course, the Kardashians have plenty of secrets locked away and this used to be one of them. The O.J. Simpson case had a lot more important events than the only interaction with Kim Kardashian and it was pretty obvious the Ryan Murphy production used Kim’s famous name to promote their own show.

In the timeline of events after the brutal killing of O.J.’s ex-wife Nicole Brown Simpson, the bedroom suicide attempt would have happened after her death but before the notorious white Bronco chase. According to a previous CDL report on Simpson’s suicide attempt, the former football great was in the process of recording his final goodbyes when Kardashian walked in.

Simpson knew law enforcement was closing in after Nicole Brown Simpson’s death and in an act of desperation, O.J. was going to kill himself right there in the Kardashian family home. Even more surprising is that Simpson was going to do it right there in Kim Kardashian’s childhood bedroom. Despite having a high profile lawyer for a dad, Kim wasn’t even close to famous on the day O.J. hunkered down in her room.

Details of the suicide attempt were made public in Lawrence Schiller’s O.J. trial tell-all titled American Tragedy: The Uncensored Story of the O.J. Simpson Defense. The true crime biographer claimed Robert Kardashian revealed the shocking suicide story during a course of in-depth interviews with O.J’s defense attorney before his death. The story would have been nothing more than a detail if Kim hadn’t become one of the most famous faces on the planet.

This is one story the Kardashian media machine can’t put a spin on so the family is just staying silent and hoping the O.J. Simpson reports will die out as soon as the FX true crime series airs starting on Tuesday, February 2.