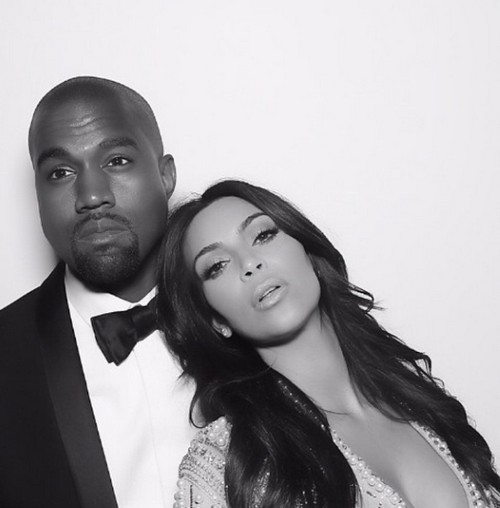 Kim Kardashian and Kanye West divorce is on hold as the Kimye couple are marking their first anniversary together by sharing never before seen photos from their Florence wedding that took place May 24, 2014. In other words, the couple’s reps have decided to do everything in their PR power to combat the divorce rumors.

In honor of making it through an entire year together, Kim Kardashian shared brand new photos from the multi day festivities. On Saturday, May 23, Kim began posting private pictures of their rehearsal dinner, which took place at the Palace of Versailles. She then moved on to posting photos of their extremely private nuptials. Kim and Kanye had a photo booth at their wedding and the Keeping Up With the Kardashians star shared some special moments of herself and Kanye West.

The first black and white Kimye picture that Kim shared shows herself with Kanye West striking a serious pose. She captioned the photo “I love this man so much! Happy Anniversary baby!” The sequence goes on for a few more photos, leading up to a black and white photo of Kim sticking her tongue out to reach Kanye’s tongue, captioned with a tongue emoji, a pair of lips emoji, and the smiley face with a tongue out emoji.

Kris Jenner has also jumped in on celebrating the anniversary… surprise surprise. How could Kim Kardashian do anything without Kris Jenner riding on the coattails of her daughter and Kanye West. The queen of public relations and self absorbed leader of the Kardashian clan, shared a video of John Legend performing “All of Me,” at Kim and Kanye’s reception. The video featured the newlyweds dancing to Legend as he performed his hit song.

This PR stunt comes at the perfect time considering all of the rumors surrounding the couple which all point to divorce. We recently reported that Kim and Kanye have been fighting over the privacy of their daughter, north West, and that this has caused heated arguments between the two, and that the “divorce” word has even been thrown around. Kim is also getting tired of Kanye trying to control her, and Kanye’s team is worried about his credibility as a rap artist with Kim Kardashian by his side.

Despite everything, Kim and Kanye have made it through their first year and that is something to be celebrated on their end. Now, lets see if they can make it through year two without getting a divorce.

Are you as surprised as we are that Kimye has survived a year? Let us know in the comments below.