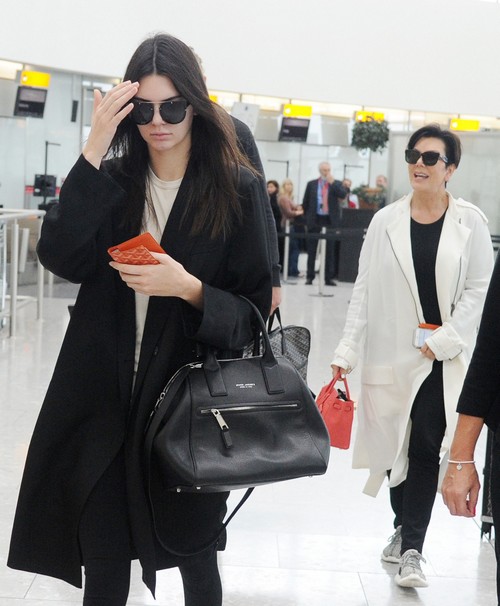 Kim Kardashian is so jealous of her sister Kendall Jenner that it is almost embarrassing to watch. You would think that Kim would be proud of her little sister, and the fact that she built an impressive resume as a high-fashion model without even having to make a sex tape, but instead Kim is a hot jealous mess. Now, the Keeping Up With The Kardashians star is under fire for buying fake Instagram followers to beat her little sister Kendall and take back her Queen of Instagram crown.

It all started last month when a photo Kendall Jenner posted on Instagram became the most “liked” photo on the social media app, replacing the #1 photo of all time – which was coincidentally her sister Kim’s photo of her and Kanye on their wedding day. Kendall playfully tweeted “take that Kimye,” and carried on with her day. But, Kim hasn’t forgotten about it – and is determined to have more followers than her sisters. Kim is already an insecure and emotional mess because of her pregnancy, and the thought of her little sister being more popular than her is putting the KUWTK star over the edge.

Kim Kardashian took to Twitter this week and announced that she “woke up to over 40 million Instagram followers,” – not that she is keeping track or anything. But, nobody is buying it and Kim basically got roasted by her Twitter followers for buying fake followers on Instagram. Seriously, why would Kim gain 3 Million followers over night? Does she think we were born last night? Buying followers on social media is not difficult, all you need is a credit card and a general knowledge of social media. And, this isn’t the first time Kim was caught buying fake followers.

At this point, all we can do is laugh at Kim’s feud with Kendall. The funniest part is, Kendall could care less – and is busy working while Kim is at home checking her Instagram followers every half hour. Someone get that girl a hobby. Do you think that Kim bought fake followers to seem more popular than her sister Kendall Jenner? Share your thoughts and theories in the comments below!

‘Keeping Up With The Kardashians’ stars Kendall Jenner and “momager” Kris Jenner are seen flying out of Heathrow Airport in London, England on July 14, 2015. FameFlynet