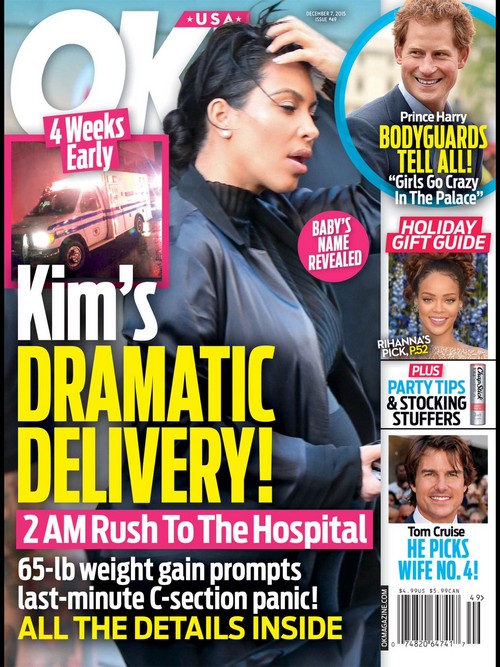 Kim Kardashian’s due date is rapidly approaching – originally reports claimed that Kanye West’s wife would go into labor on or around Christmas Day, December 25. However, recently Kim Kardashian confirmed that she was having some complications with her pregnancy (gestational diabetes and high blood-pressure), and rumors began popping up that the doctors planned on inducing her labor early – and North West’s baby brother could be here by the end of November.

This week’s cover of OK! Magazine features a photo of a very pregnant and distraught Kim Kardashian, the headline reads, “Kim’s Dramatic Delivery: 2 AM Rush To The Hospital!” Now, before everyone gets worked in to a frenzy by the confusing cover – NO, Kim hasn’t given birth to the baby yet, however she did make a late night trip to the hospital recently. And, there is a very good chance she will be having the baby early – just like North West, who has born five weeks early.

An inside source revealed to OK! Magazine, “Kim was rushed to the hospital in excruciating pain around 2 AM. Everything turned out to be okay. She is panicking, every day she finds something new to worry about, she is driving herself and her husband Kanye West crazy.”

The source went on to dish that Kim is once again battling preeclampsia (like her first pregnancy), and the doctor has recommended an emergency C-section. But, Kim’s husband Kanye West wants her to “hold on” for as long as she can to ensure that the baby is fully developed and healthy.

Of course, while Kim is crossing her legs and trying to keep her baby boy in position until her due date – her meddling mother Kris Jenner is working hard to convince Kanye West to let them film this baby’s birth for their reality show Keeping Up With The Kardashians. Kanye banned Kris Jenner’s camera crew from the hospital during North West’s birth – and it’s unlikely that he will have a change of heart this time around.

OK! Magazine’s source added, “Having this child means the world to Kim, but she is so terrified that there is nothing any one can say or do to calm her down. She won’t feel better until the baby is safely in her arms.”

So, do you think that Kim will make it to her original due date on Christmas Day? Is Kanye West being selfish by not allowing Kim to get an early C-Section? Will Kim’s husband cave and Let Kris Jenner and her camera crew in to the hospital this time around? Let us know what you think in the comments below!