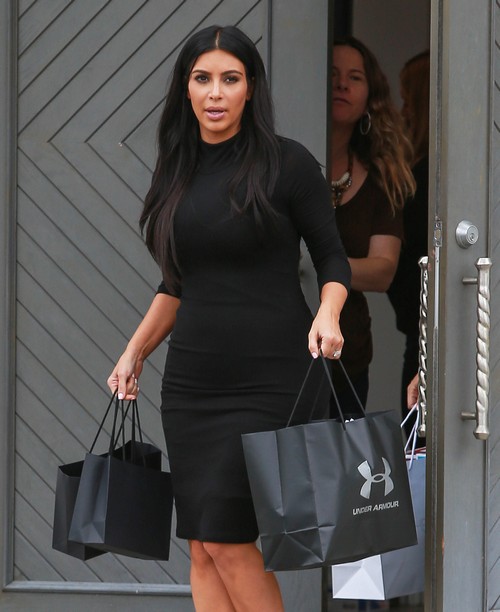 Kim Kardashian is pregnant with a baby boy – and her husband Kanye West is getting the son that he always wanted. When Kim announced on Keeping Up With The Kardashians that she and Kanye had finally conceived and North West had a sibling on the way, CDL reported that the reality TV star was pregnant with a boy, now multiple sources are coming forward and confirming the news. Kim and Kanye were actually spotted on June 1 perusing the boy section of a kids’ clothing store, further fueling rumors that they would be having a son.

According to a new report in US Weekly, sources close to Kim and Kanye are backing up CDL’s report and confirming that they are expecting a son. The magazine’s insider dished, “Kanye loves Nori more than anything, but to make his world complete he really wanted a little boy, an heir. He’s overjoyed!” Kim was apparently just as thrilled as Kanye when she learned that she was pregnant because she “always wanted two kids, a boy and a girl.”

It’s really just common sense that Kim Kardashian is pregnant with a boy, she and Kanye both expressed their eagerness to have a son and a brother for North West n interviews over the course of the past year. And, Kim conceived via IVF treatments. The celebrity couple has millions of dollars at their disposal, and they both desperately wanted a son, it would be absurd for them to not have male embryos implanted. When money is not an issue, and you are seeing top fertility doctors – you have the option of deciding whether you get pregnant with a baby boy or a baby girl.

Is there any doubt in your mind that Kim Kardashian will give birth to a baby boy? How do you think they will make the official gender announcement, even though we all already know what she is having? What will couple name their “heir?” Let us know what you think in the comments below!

FameFlynet: Kim Kardashian June 9 and 10 photos with small baby bump despite the spanx and girdle – don’t squeeze the baby boy!