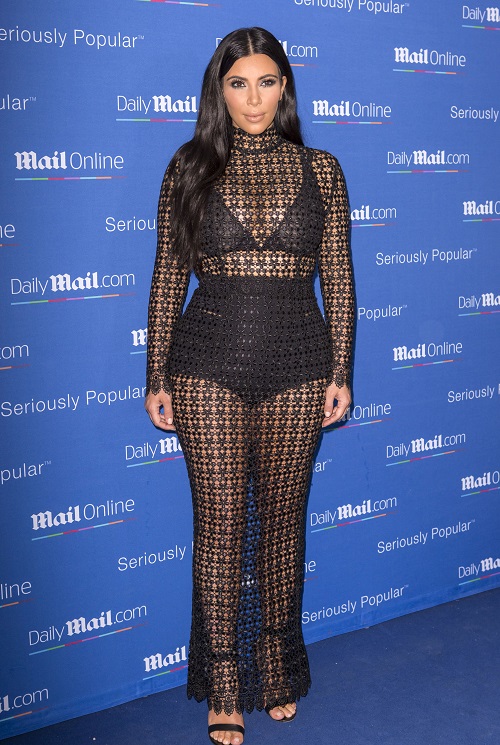 Kim Kardashian attended the DailyMail.com yacht party on June 24 in Cannes, France – and shocked onlookers when she arrived in a nearly nude black lacey outfit – which didn’t leave much to the imagination. Just like Kim’s previous pregnancy with North West, the Keeping Up With The Kardashians star doesn’t let little things like pregnancy pounds or baby bumps stop her from showing some skin – or literally almost all of her skin.

Ironically, Kim attended the party with Kris Jenner and her boyfriend Corey Gamble. Kylie Jenner and her boyfriend, Tyga we also there, but Kim’s husband, Kanye West, was a no-show. Kanye has a way of playing super husband until Kim gets pregnant, and then disappearing when she starts getting hormonal and packing on the pounds.

Kim Kardashian’s bizarre choice of maternity wear did not go unnoticed at the yacht party, and it probably didn’t help matters that her little sister was wearing a very similar lacey dress – and she isn’t pregnant. If you are going to be a copy cat and arrive at a party twinning, you probably should go twinning with someone who doesn’t make you seem even larger than you are.

We totally get that being pregnant means gaining weight, and we would never hate on expecting mother’s bodies because that’s a part of life. But Kim Kardashian seriously makes it hard to stick to that policy. It doesn’t matter how famous you are; it is just not attractive for you to cram your baby bump into latex mini skirts and see-through lace dresses. We’re not saying she should just wear a tent for the next nine months, but there has to be something more comfortable that Kim Kardashian could wear that would make us less uncomfortable when we see her.

What do you think of Kim Kardashian’s maternity fashion? Why do you think Kanye West always seems to disappear when the going starts to get tough in Kim’s pregnancies? Let us know what you think in the comments below!