Kim Richards Arrested For Drunk Fight: RHOBH Star Lies About Being Sober, Headed Back To Rehab? 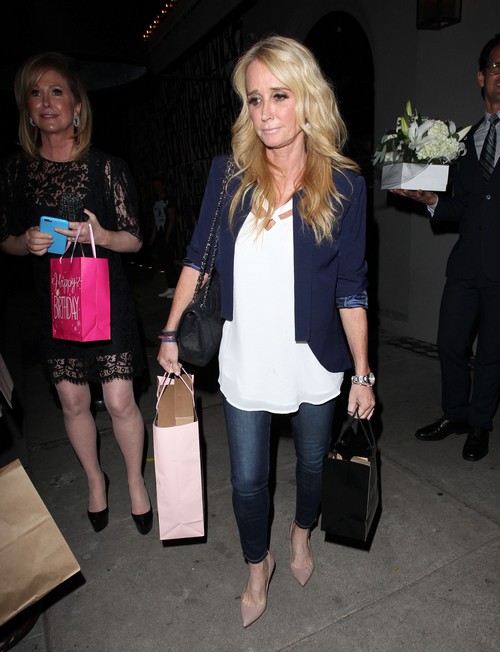 Real Housewives of Beverly Hills star Kim Richards was arrested in Los Angeles on Thursday May 16. Kim Richards was reportedly arrested at Beverly Hills Hotel around 1:30 AM, and despite the fact that the Bravo celebrity insists she is sober, E! Online is reporting that she was a hot drunk mess when she was taken away in handcuffs.
According to E! Online, “the Beverly Hills Police were called around 1:30 a.m. by security in response to a reported fight, where Richards was described as belligerent with slurred speech and reeking of a strong odor of alcohol.
Per police, Richards was initially in the bathroom and refused to come out, but she was eventually brought to the Beverly Hills Police Station for booking. She has since been processed and released.”

Although it is unclear exactly what Kim Richards was charged with – it’s safe to assume it was probably something along the lines of drunk and disorderly conduct. When Kim Richards and her sister Kyle were introduced on RHOBH, Kim’s struggle with sobriety was a prominent storyline on the show. Kim checked herself in to rehab in 2011 and after a 30 day stint has insisted that she is sober ever since – but nobody was buying it. Ironically, this month on RHOBH Kim was acting bizarrely on an episode and still insisted she was sober and blamed her behavior on the unexpected side-effects of a pain pill she had taken because she had pneumonia.

It sounds like Kim’s bout with pneumonia was just a poorly orchestrated plan to cover up the fact that she fell off the wagon. On her Bravo blog she just wrote, “”In the next episode you will see that I end up in the hospital with major injuries due to being sick, but because of my history, some people will automatically assume one thing, even though they have seen nothing but strength and courage in my sobriety for the last three years.”

What do you think of Kim Richards falling off the wagon and causing a drunken scene and being arrested? Do you think she will continue to insist she is sober, or finally admit she still has a problem and check herself back in to rehab? Let us know what you think in the comments below!