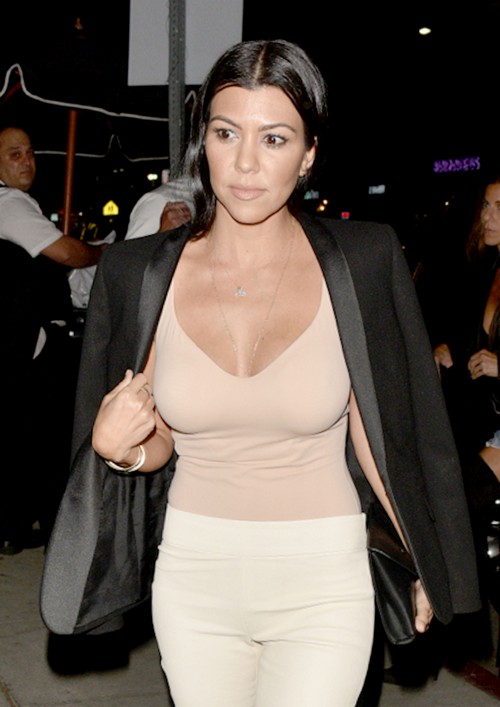 Was it those epic full-frontal pics of Justin Bieber that tempted mom of three Kourtney Kardashian? Or was it Kourtney’s annoyance that douchey ex Scott Disick is banging a chick half Kourtney’s age? Whatever the reason, we are loving that Kourtney Kardashian left a nightclub with barely-legal Justin Bieber and hung out with him until the wee hours of Saturday morning. Talk about a revenge play! Scott Disick has to be seething at Kourtney’s high-profile hook-up.

To add salt to the wound of Kourtney’s late night love match with the Biebs – Scott Disick was just dissed by 18 year old galpal Lindsay Vrckovnik. Despite Scott tweeting pics of he and Canadian model Lindsay implying they’re an item, she’s telling people he’s just a desperate older dude trotting around after her hoping for scraps of attention.

What’s also creepy is that Lindsay Vrckovnik just graduated in the class of 2015 – like Kourtney’s youngest sister Kylie Jenner. On the plus side, at least Vrckovnik graduated from a real high school, unlike barely-literate cosmetic procedure junkie Kylie Jenner.

Perhaps Kourtney Kardashian’s is just following in her momager’s footsteps… After all, 59 year old Kris Jenner is banging 34 year old Corey Gamble – that’s a 25 year age difference. Between Kourtney and the Biebs, by comparison, there’s a comparatively scant 15 year age difference – Kourtney is 36 to Bieber’s 21. And heaven knows, Kourtney has never shown sound judgment when it comes to men – she was, after all, involved with Scott Disick for nearly a decade.

But if Kourtney and Bieber are a thing, is Kourt searching for Scott Disick version 2.0? Justin Bieber’s recent nudie paparazzi shot show an impressive bit of manhood, but that’s the same bit of manhood the Biebs likes to whip out to pee in mop buckets… Bieber has a hard-partying background much like Scott Disick. It seems like Kourtney has a type. Blondish, check. Douchey, check. Younger, check. Party hound, check. Cheater, check. Wow. Maybe it’s not so odd that Kourtney took up with Justin Bieber.

Alternately, Kourtney may not be hooking up with Justin, but could just be waging a social media war of appearance to look like she’s having more fun than Disick and make her baby daddy jealous. What would crawl up Scott Disick’s craw more than Kourtney hooking up with a guy 11 years younger than him, better looking, more successful and impressively hung? Sure Scott’s hanging with a Canadian model, but Kourtney is out with the most famous young man on the face of the planet.

What should also disturb Scott Disick is that Justin Bieber has been seen hanging around his and Kourtney’s kids. Bieber is close to Kourtney’s younger sisters, Kylie Jenner and Kendall Jenner, and Apparently Mason Disick is a fan of the young singer.

A few months ago, Justin Bieber tweeted photos of him hanging with Kourt’s kids. Then last night, Justin Bieber Instagrammed a photo of he and Kourtney at Universal Studios Halloween Nights. Biebs is certainly not denying they’re spending time together.

So whether this was just an evening of hanging out with a family friend or something much more interesting remains to be seen. Given the clear difference in star power between Justin Bieber and Lindsay Vrckovnik, we can definitely say this: the score is Kourtney Kardashian 1, Scott Disick 0. Good luck Scott Disick…