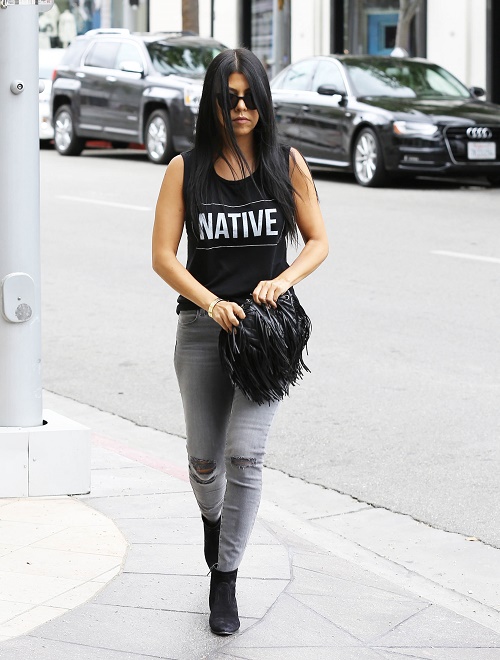 Kourtney Kardashian was seen going into an L.A. based office building on Monday. Seems that all signs are pointing to her obtaining a lawyer in order to battle for custody of their 3 children Mason (5), Penelope (3), and baby Reign (6 months), as well as money issues with baby daddy Scott Disick. The mother of 3 went into a Century City Building filled with lawyers and one particular attorney comes to mind: top celebrity divorce lawyer Laura Wasser. She is the same lawyer both Kim Kardashian and Khloe Kardashian used in their divorces.

Even though the two were never married, they were together for 9 year and Kourtney wants to work out custody arrangements, as well as a financial settlement. Kourtney has had enough of Lord Disick’s partying ways. She wants a man who will treat her right – not a cheater. Scott was caught getting up close and personal with Chloe Bartoli in Monte Carlo, and this was the last straw for Kourtney. This situation further confirmed that it was time to move on.

Since the split, Kourtney has been keeping herself busy with work and her kids, all while Scott continues to live life as a single man. While he continues to get backlash from his fans over his choosing to party instead of being with his family, it goes on deaf ears. Friends fear for Scott as he is sinking deeper into the darkness. Kourtney had to explain to her kids Mason and Penelope that daddy will no longer be there.

She will not slam their father’s character in front of the kids because she knows how much they love him. However, Scott did get some quality time with his kids when Kourtney went to support Caitlyn Jenner at the 2015 ESPYs on July 15. He hung out at their Calabasas, CA mansion with the kids, giving Kourtney some time away.

Scott seems to blame the demise of their relationship on the fact that Kourtney won’t marry him. Okay, but why would she have ever agreed to marry a drunkard and cheater?

Kourtney is so over Scott that she is ready for change and is looking forward to being single and testing the dating pool. Seems like this is it – over, done. Stick a fork in it! Do you think if Scott went to rehab and stopped partying Kourtney would take him back or is she dunnzo for good? And do you think Scott deserves another chance?