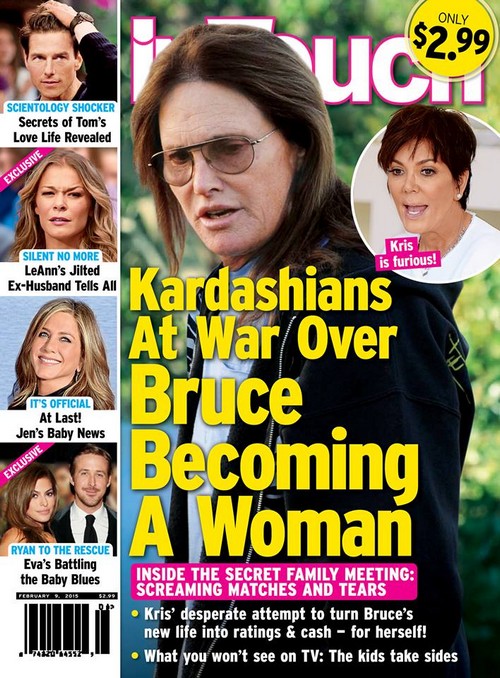 Kim Kardashian and Kris Jenner are fighting over Bruce Jenner’s transgender moves towards becoming a woman. Kim supports her step-dad while greedy Kris wants to capitalize on it and is only thinking about money. What a surprise! Kris Jenner might be divorced from Bruce Jenner, but that doesn’t mean she’s going to be happy with his sex change. For one, he’s completely removed any chances of them getting back together, and I’m sure Kris was keeping that option for a rainy day. And for another, this is a narrative that Kris Jenner can’t control, despite her desperate attempts to try.

In fact, the latest cover issue of In Touch Weekly suggests that Bruce Jenner and his family have been fighting over his sex change to a woman and his choice to come out as transgender. And although Kris Jenner is furious, she’s reportedly trying hard to being Bruce back into the reality TV fold – largely to take advantage of the fascination surrounding his sex change and plastic surgery, and then turn that into ratings and cash. Kim Kardashiaon on the other hand is taking a kinder and gentler approach and simply supporting Bruce as he becomes a woman.

Of course, Kris is already planning an E! special starring Bruce, but the question is, will Bruce agree to this? There’s a reason he quit Keeping Up With The Kardashians, and it’s because he got sick of the endless famewhoring and attention-seeking behavior – especially when he had such a personal and private decision to make about his future. But now that he’s left that life behind, he’s getting sucked back in via the vacuum of Kris Jenner and their endless fighting. And you know, In Touch’s sources also add that the kids are taking sides in this argument, with more supporting Bruce than their mother.

In Touch also has a story on how Eva Mendes is battling the ‘baby blues’, and Ryan Gosling is swooping into the rescue. D’awwww. Then, there’s the weekly story on Jennifer Aniston’s baby, which of course she will whine about in the future. And finally, in what is absolutely not a ‘Scientology shocker’ despite the magazine’s claim, secrets about Tom Cruise’s love life have been revealed this week, i.e. the fact that Tom’s marriage to Nicole Kidman was sabotaged in order to bring Tom back into the crazy fold.