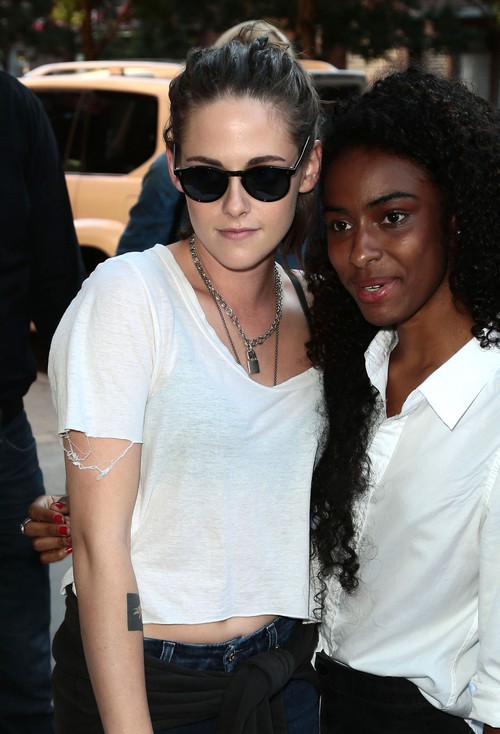 Kristen Stewart’s name is usually accompanied with Robert Pattinson on some level. Thanks to their Twilight roles and awkward showmance, the little known actors became household names and their careers were set. The fame didn’t mean Kristen Stewart was necessarily thrilled, but now that her ex-boyfriend is marrying someone else, Stewart is finally happy and free of Pattinson; undeniably thankful he’s FKA Twigs’ problem now.

Kristen always looked like the human version of Grumpy Cat; encompassing the teenage angst that Twilight fans constantly defended. Perhaps all that lip-biting anguish had little to do with the media and more to do with her showmance with Rob. Instead of being who she is now, Stewart was put into a romance with her onscreen lover, Pattinson.

After 4 years of being attached to Robert and pretending to be devoted and in love with her costar, Kristen was caught having an affair. It wasn’t a stealth operation. Kristen and her ‘Snow White and the Huntsman’ director, Rupert Sanders, were caught making out in in KStew’s car as she was wearing Pattinson’s Detroit Tigers baseball cap. Kristen and Rupert even got out of the car to kiss while enjoying a view of the Hollywood sign. Being that Stewart is constantly being hounded by paparazzi – she had to know she was being photographed.

Pattinson was painted as the victim, and Kristen continued to be the rebel and bad girl. Stewart was also finally free to be with her assistant turned girlfriend, Alicia Cargile. The two are constantly spotted together, holding hands and even kissing. After spending the New Year together on beachy vacation in Honolulu, a source confirmed to the Daily Mail in January, ‘She is finally able to focus on herself and not worry about the nonsense that is out there. This is the best many close to her have seen her in quite a while.’

It’s evident Kristen is happier with Alicia Cargile than she ever was faking it with Robert Pattinson. Her interviews aren’t nearly as woeful as her Twilight days, anchored to Robert. In the September issue of Elle, Stewart confessed, “The whole smiling thing is weird, because I actually smile a lot. I literally want to be like, ‘Dude, you would think I was cool if you got to know me.’”

Rob has also moved on with FKA Twigs, who embodies his passion for music. After Robert Pattinson started dating Twigs, the two became inseparable and the ‘Twilight’ heartthrob proposed. FKA Twigs’ career reached a new level, thanks to her association with Robert. Kristen is happy she can be with her girlfriend, Robert is happy not to have to tow around a grouchy lesbian, and Twigs can enjoy the benefits of being attached to a mainstream figure with a huge fan base.

What do you think or Robert Pattinson and Kristen Stewart’s lives and careers post Twilight showmance? Are they better off apart, or will the stigma of Twilight and cheating never wear off?