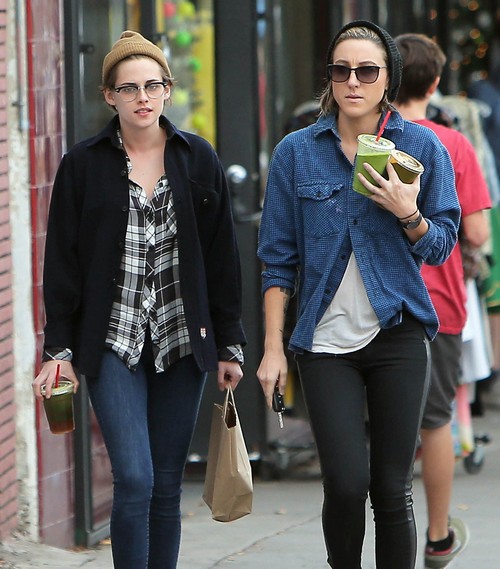 Is Kristen Stewart trying to parlay her PDA dating relationship with girlfriend Alicia Cargile into a superhero franchise movie career? Kristen Stewart wants to be a superhero. Of course she does. Kristen’s realized that for all her whining about superhero movies and the Hollywood-ness of it all, superhero movies and YA franchises are the only way to maintain a consistent big-money career in Hollywood nowadays unless you are a great actor with a massive reputation (Daniel Day-Lewis). Making indie movies and being critically acclaimed will only sustain for you so long, especially with Hollywood’s increasing obsession with international marketing and revenue.

Kristen told Yahoo Movies, “I would love to show people that I can do more than just be ‘Kristen Stewart’ in a different movie, in a different circumstance. I’m sure I could get on board with Captain America, you know what I mean?… It would just have to be the right thing.”

Is ‘right thing’ code for having a career again? To be honest, Kristen Stewart’s public image is the best right now that it’s been in two years, ever since her cheating scandal with her married Snow White and the Huntsman director, Rupert Sanders. Even though that movie did very well at the box office, Kristen didn’t get any of the credit because of the ensuing media storm that followed, and of course, her break up with Robert Pattinson.

But now, Kristen’s critical acclaim is back [courtesy of Still Alice], and that also means that studios are willing to take a chance on her again. Not only that, but it also means that Kristen’s lesbian or bisexual nature and her relationship and PDA with Alicia Cargile could be manipulated to help the studio. Right now, Kristen’s new romance with Alicia could be used as a selling point, something which would have been unheard of 10 years ago. Plus, Kristen’s studio cache from the Twilight movies still exists, even though nobody’s been willing to use it for fear of negative PR. But at this point, even the Twi-hards have moved on, right?

What do you guys think? Would you watch a superhero movie starring Kristen Stewart? And do you think that Kristen’s relationship with girlfriend Alicia Cargile could be used as a selling point? Let us know your thoughts in the comments below.