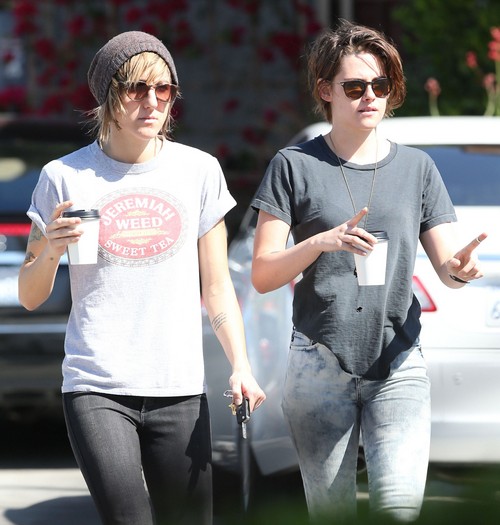 Kristen Stewart and girlfriend Alicia Cargile are living together and in love – now rumors are out that the couple are secretly married! If you’re a Twilight superfan, you may still be hoping that Robert Pattinson and Kristen Stewart will get back together for a revival of their relationship. This won’t happen because it’s quite likely there was never a relationship there at all. And not only have the two quit the pretense they were ever serious about each other, rumors are swirling that Kristen Stewart may have tied the knot and married girlfriend Alicia Cargile. In fact, if the Hollywood undercurrents are true, KStew has never been straight and all her male relationships have been career moves.

Kristen started the Twilight series when she was just 17 and getting her career going. Kristen reportedly denied gay rumors earlier this years saying, “If I was a lesbian, I wouldn’t hide it. It’s nothing to be ashamed of!” Agreed, it certainly is nothing to be ashamed of – but when you’ve got a big budget series of movies riding on you representing yourself as a love-struck teen involved in a sexy male werewolf – vampire – clueless girl love triangle, you can’t come out. Kristen Stewart coming out as gay anytime during the production and promotion of these films would have created a PR disaster.

And while there’s no issue with a gay actor playing straight or vice-versa, tween girls are going to struggle to buy an out lesbian in the pivotal role of Bella. She and Robert Pattinson were a showmance that was created to drive popularity for the films and tons of marketing revenue. And it worked incredibly well. And as for that Rupert Sanders thing, maybe Kristen was a victim to the Hollywood casting couch or maybe that was contrived to get more attention for their Snow White and the Huntsman flick – or to get Kristen out of her pretend relationship with R-Patz and get Sanders out of a failing marriage.

Kristen has a had a number of rumored girlfriends over the years – from her kiss with Dakota Fanning in The Runaways when Kristen played lesbian rocker Joan Jett to her real life relationship with Tamra Natisin (Katy Perry’s assistant) and now Alicia Cargile. There’s pretty much no denying what’s going on – whether they are married yet or not. The two are making out in public, holding hands in front of cameras and are living together. If the two haven’t tied the knot yet, it may be soon.

So why won’t Kristen just come clean? It’s all about her career and her sense of privacy. If she’s out and about with a BFF, that’s really no big deal. But if KStew is out with her confirmed lady lover, they will not have a moment’s peace again – much as it was when she was faux dating Robert Pattinson. The real question is, will Alicia Cargile be content pretending to be Kristen’s friend when they are so much more? Or will she push KStew to come clean about how serious they are? Stay tuned.

FameFlynet: Kristen Stewart and her girlfriend Alicia Cargile spotted out and about in West Hollywood, California on March 28, 2015