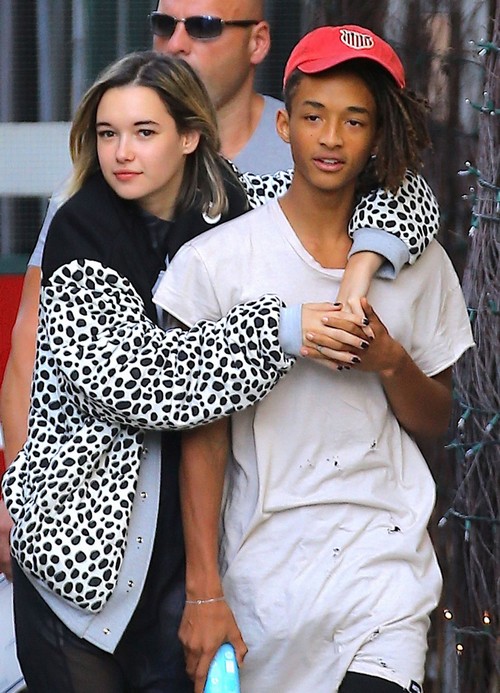 It looks like Kylie Jenner might have finally met a worthy adversary in Jaden Smith’s new girlfriend Sarah Snyder. Jaden Smith was Kylie Jenner’s first love, and the young teens “dated” for several years. Then, Kylie turned in to a carbon copy Kardashian and Jaden went rogue – hating all things mainstream and materialistic, especially the Kardashians. It was recently reported that Kylie Jenner went into a jealous rage at New York Fashion Week after she spotted Jaden in the audience, making out with his new girlfriend Sarah Snyder and not watching her walk the runway.

Apparently, Kylie Jenner never really got over Jade, despite the fact that she is now dating Tyga. Kylie’s obsession with Jaden has been going on for years – and TMZ is reporting that one of his ex-girlfriends is seeking a restraining order against Jenner, Chelsea Clark claims that Kylie was stalking her on social media and even sent people to threaten her because she was dating Jaden. Chelsea even seems to think that Kylie caused a car accident that she was recently in – to send her a warning to stay away from Jaden.

So, Chelsea Clark is scared for her life – and Kylie Jenner has her shook. But, Jaden’s new girlfriend Sarah Snyder might be a different story. We all know Sarah has a colorful past, but she might be much more dangerous than any of us realized and Kylie Jenner has another thing coming if she thinks she can scare Sarah off like she did Chelsea Clark.

An exclusive source from Sarah Snyder’s hometown shed some light on Jaden Smith’s mysterious new girlfriend. The insider dished to CDL, “In addition to her most recent and well published arrest she received after sealing a $16,000 Birkin bag from an acquaintance, she has multiple arrests and is in the Charlotte Mecklenburg county jail system. Her charges she received back home include a felony conspiracy, larceny and breaking and entering charge. Her habit of stealing was motivated by her obsession with the drug xanax, when it came to getting drugs and pills, nothing stopped her from getting them, she was fine with fucking a drug dealer if that meant she could get her bars (the name for the 2 milligram xanax pill). There is a reason that nobody from back home would support her success, which mainly came from lying on her back. Jaden might want to listen to the warnings he has received about her, on the outside she is a beautiful girl, but beneath that she is a friend who exploits those around her to get what she wants.”

Our source went on to say that there are even photographs of Sarah Snyder performing sexual acts for drugs floating around. Is anyone else as shocked and confused as we are right now?

So, Kylie Jenner is an alleged stalker and secretly obsessed with Jaden Smith. She already ran one of his girlfriends off – and now she is waging war against his new girlfriend Sarah Snyder, who sounds potentially dangerous. There is a war brewing, and we can’t wait to see how this all plays out. Who do you think will come out on top, Sarah or Kylie? What does Tyga think about all this – certainly this news about Kylie’s obsessions and girlfriend hating come as no surprise to Blac Chyna! Share your thoughts on this mess in the comments below.