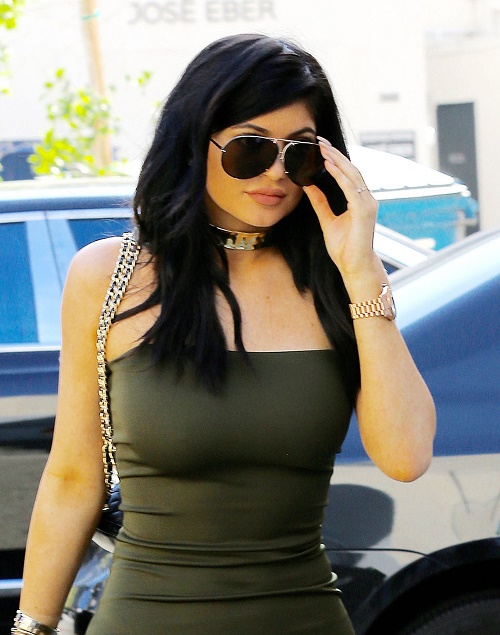 Kylie Jenner and her boyfriend Tyga ignored the worldwide debut of Caitlyn Jenner, and were spotted out and about on Monday, June 1. The July edition of Vanity Fair’s cover hit the internet on June 1 – and the world was in an uproar over the debut of Caitlyn Jenner, formerly known as Bruce Jenner. While the Kardashians mobbed the internet to support Caitlyn and ride her coattails through the media frenzy she created, Kylie Jenner and Tyga carried on as if nothing happened.

Kylie and 25-year-old Tyga were spotted out on Monday, June 1 in California, and they paid her older sister Kendall a visit at her house. According to multiple reports, Kylie is not taking Caitlyn’s transition well – and she refused to participate in the media frenzy that her former father created. Or is Caitlyn still her father? Does she have two moms now? We can see why the 17-year-old would be overwhelmed and confused by the Caitlyn Jenner Vanity Fair cover.

According to Naughty Gossip’s inside sources, Kylie is refusing to call Caitlyn by her name, and is still calling her “Bruce.” Naughty Gossip’s insider explained, “Kylie Jenner has had the most difficult time with this transition. As such, it’s been very hard for her to stop calling Caitlyn ‘Bruce,’ even though that person is not around anymore. Caitlyn has tried talking with Kylie, though things don’t seem to have changed.”

At the end of the day, Kylie Jenner is still just a teenager, and who can really fault her for not taking Caitlyn’s transition well and wanting to hang out with her boyfriend Tyga and sister Kendall and pretend that nothing is happening? Do you think that Kylie is being a brat? Or would you react that same way if your father informed you that his name was Caitlyn and debuted on the cover of Vanity Fair? Let us know what you think in the comments below!