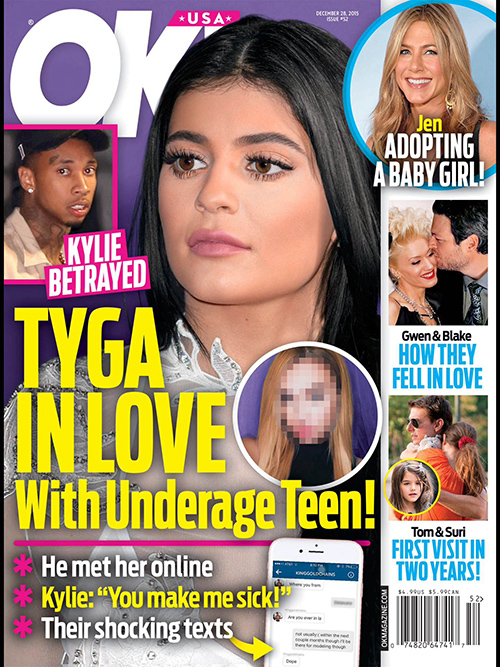 Has Kylie Jenner once again been humiliated? Has Kim Kardashian freaked and banished Tyga after a teen texting scandal was exposed? Tyga allegedly has been texting back and forth with a 14-year-old model who lives on the East Coast. The rapper really should know better! You would think getting caught sending naked selfies to Mia Isabella would have taught the guy a lesson.

After that texting scandal, Kylie walked out on the relationship – but the split was short-lived. The smooth-talker was able to convince Jenner that Mia meant nothing to him, even though Kylie took Tyga back the young couple’s relationship remained rocky, sources revealed.

The new texting scandal has stirred up all the trust issues between Kylie and Tyga. An insider recently told OK! that there is no way Kylie’s boyfriend can weasel out of this latest disaster. Jenner doesn’t completely trust that Tyga and decided to go snooping around on Tyga’s phone.

That’s when Kylie Jenner found the texts between her boyfriend and the unnamed teenager. A source revealed that a humiliated Kylie confronted Tyga who, of course, denied everything. It’s all just a misunderstanding, right?

Kardashian family insiders disclosed that Kylie isn’t as naïve as Tyga thinks. Jenner has finally caught on and doesn’t want to hear any more excuses – as far as Kylie is concerned there is no explanation at all for texting a 14 year old. Kylie reportedly feels like a fool and doesn’t want Tyga around.

Kim Kardashian, Kendall Jenner, and Kourtney Kardashian have never trusted Tyga, family friends divulged. Kylie’s older sisters have kept quiet and haven’t confronted her with those feelings. But Kourtney, Kim and Kendall have unleashed their wrath upon Tyga.

An insider revealed that Kylie’s sisters’ texted the “Spitfire” rapper with all the ridiculous lies and demanded in no uncertain terms that he stay away from Kylie. Tyga’s now been told by Kourtney, Kim, Kendall and Kylie to take a hike? Sounds like banishment! The guy is bad news, don’t you think?

Has Kylie Jenner finally wised up and sent Tyga packing for good? Will Kim Kardashian be able to keep the love of Kylie’s young life out of the picture? Where is Kris Jenner and what does the momager Kris Jenner have to say about this most recent scandal? Is Kris busy baking a cake in preparation for Kylie’s reunion with Tyga?

Let us know what you think in the comments section below and come back to CDL for all the latest Kardashian news and gossip.