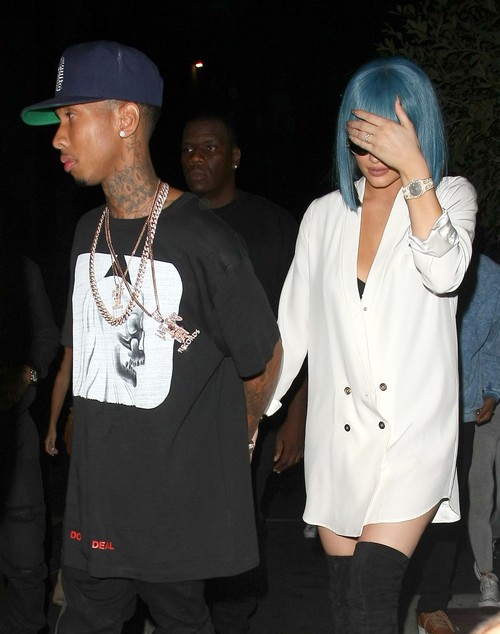 Kylie Jenner looks down on her Kardashian sisters and it is no secret that the 18 year old reality TV star is severing ties slowly but surely with her family – she thinks that she is already a much bigger star than they ever will be. Kylie’s hatred for her Kardashian sisters runs much deeper than just branding herself as an individual and not merely Kim Kardashian and Khloe Kardashian’s little sister. There is literally no loyalty between Kylie and her sisters – and she sent the Kourtney Kardashian the biggest “F–k You” yet this weekend.

Kylie Jenner and her boyfriend Tyga were out partying this weekend – with Kourtney Kardashian’s ex Scott Disick! After Scott cheated repeatedly on her sister, and basically abandoned her nieces and nephews, all while embarrassing the hell out of the Kardashians – Kylie Jenner is apparently still BFF’s with him. Kylie and Tyga headed to 1OAK in West Hollywood for The Weeknd’s alum release party, and Scott Disick tagged along with them. There was no bad blood between Kylie and Scott, he hung out with them the entire night, and according to People Magazine – Kylie even let him wear her sunglasses.

Since when did it become socially acceptable to head out for a night on the town with the same man that cheated on your sister and left her alone to raise three kids by herself – less than a month after their break-up? A source close to the situation dished to CDL, “Kourtney is obviously hurt that Kylie is still partying with Scott. But, she’s not surprised. Her little sister has turned into a ruthless fame-hungry monster, and all she cares about is fame and fortune, and making sure everyone knows she isn’t a Kardashian. Scott is cut off by the Kardashians, what better way to prove Kylie isn’t a Kardashian than to keep hanging out with him?”

Kylie Jenner is something else. We’re not sure if she is really this horrible, or has one of Hollywood’s most clever and twisted PR agents on her side. Was hanging out with Scott Disick all part of her plan to make headlines and disassociate herself from the Kardashians? Or does she really hate her sister Kourtney Kardashian that much? Let us know what you think in the comments below!