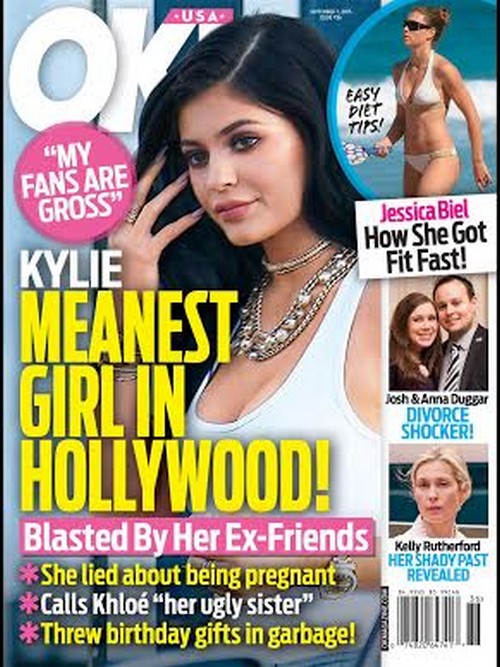 Kylie Jenner, the youngest of the Keeping Up With The Kardashians crew has more issues than we care to count. Between her formerly illegal relationship with rapper Tyga, to her plastic surgery addictions, her constant need to show off her goodies on Instagram, her strained relationship with her transgender dad, her constant bickering with her momager form hell Kris Jenner, and her alleged drug use – homegirl could really use some serious soul-searching. According to this week’s cover of OK! Magazine, Kylie’s issues don’t stop there – apparently the 18 year old is a total mean girl, and has a lying problem!

Kylie Jenner graces this week’s cover of OK! Magazine, in all her plastic glory. The headline screams, “Kylie: Meanest Girl In Hollywood!” Apparently her ex-friends are “putting her on blast” and have been telling all to the tabloid. The cover goes on to tease that Kylie “lied about being pregnant, calls Khloe the ugly sister, and threw birthday gifts in the garbage.” Oh, and Kylie thinks her fans are “so gross.”

Kylie Jenner has no friends, other than her boyfriend Tyga – who basically is using her for her fame and fortune. OK! Magazine’s inside source dished, “She has been slowly separating herself from the kids that she grew up with. They used to all themselves ‘the squad’ and they basically lived at each other’s houses. But she has pushed almost all of them to the side.”

Allegedly, Kylie is the epitome of a “mean girl,” and no one wants to hang out with her because she is always flirting with everyone’s boyfriends, and she constantly is putting down other girls and making fun of their clothes. The people that get the brunt of Kylie’s horrible attitude are her parents, sisters, brother Rob, and boyfriend Tyga. OK! Magazine’s insider went on to say, “She trashes Kim for copying her style, she is cruel about Rob’s depression, and she has even called Khloe her ‘ugliest sister.’

Well, shocker – Kylie Jenner is portrayed as an evil little witch. Like we didn’t all see that coming a mile away. Are you surprised by Kylie’s mean girl behavior? Or is this exactly what you expected seeing as how she grew up on reality TV and was raised by the wretched Kris Jenner? Let us know what you think in the comments below!