Kylie Jenner NOT Pregnant With Scott Disick’s Baby, Kourtney Furious – Kylie Has To Quit Keeping Up With The Kardashians? 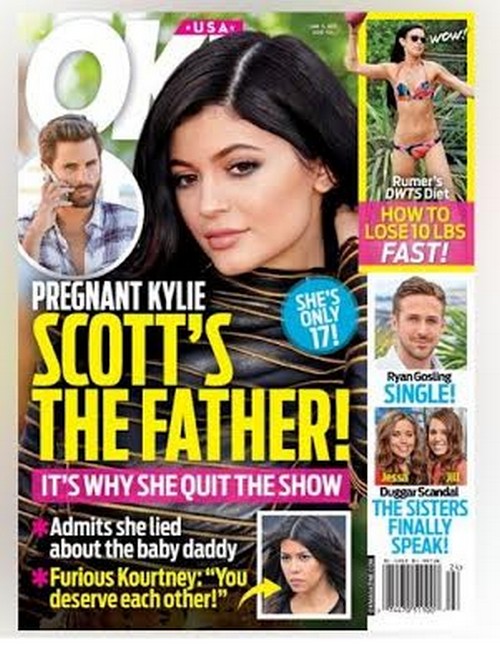 Kylie Jenner is pregnant with Scott Disick’s baby – according to a new ridiculous report from OK! Magazine. We’re going to go out on a limb here and assume that her rapper boyfriend Tyga is not a happy camper. Ironically, Kylie just took to Twitter this week and slammed rumors that she was pregnant – most likely the magazine had already been printed when the 17 year old completely dispelled their cover story before it even hit newsstands.

This year the tabloids have been trying desperately to impregnate the Kardashian sisters with Scott Disick’s baby – it’s becoming a bizarre obsession. No one is buying it, yet they keep printing them! First, Scott Disick was supposedly cheating on Kourtney with her sister Khloe, then he was getting engaged to Kendall Jenner and “getting sober” for her, and now he allegedly got 17 year old Kylie pregnant. The tabloids just keep flinging affairs at Scott Disick in the hopes that one of them will stick. Before we know it he will be cheating on Kourtney with her mother Kris Jenner – actually that one we might actually believe.

The June 15 cover of OK! Magazine features a photo of 17 year old Kylie Jenner, the headline reads “Pregnant Kylie: Scott Is The Father!” OK! goes on to reveal that Kylie’s baby with her brother-in-law Scott Disick is the real reason she is quitting Keeping Up With The Kardashians. Oh and get this, “Kourtney is furious,” didn’t see that one coming right? Apparently Kourtney told Kylie and Scott that they “deserve each other.” Now, Kylie has no choice but to quit Keeping Up With The Kardashians, or so says the bogus cover.

There is always a chance that Kylie Jenner is pregnant, she is a promiscuous 17 year old girl who is allowed to do whatever she wants. But, is she sleeping with Scott Disick? Nothing ever shocks us when it comes to the Kardashian Family, however we are pretty confident that Kylie and Scott are not hooking up. What do you think of this week’s absurd OK! cover? Let us know in the comments below!