BY Amanda Austin on May 12, 2015 | Comments: 4 comments
Related : Gossip, Hot Celebs, Hot News, Keeping Up With The Kardashians, Kylie Jenner 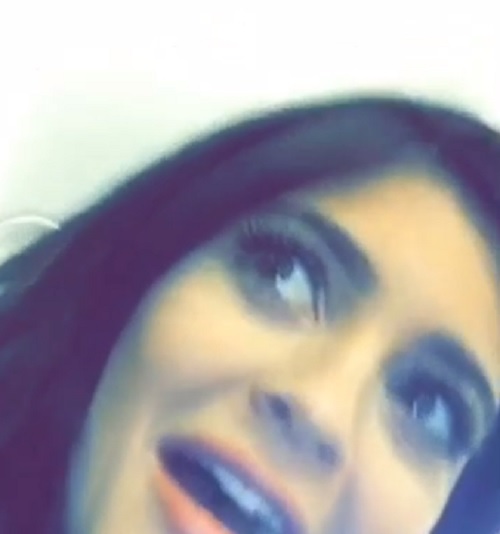 Did Kylie Jenner’s boyfriend Tyga turn the 17 year old into a pot-head? It’s no secret that Tyga is an avid marijuana smoker – the rapper even reportedly invested $5 Million in a rolling paper company. A video surfaced of Kylie Jenner on SnapChat recently where the Keeping Up With The Kardashian star was eating Popeye’s chicken and announced on video, “I’m high as f—k.” Naturally, social media went wild over her confession – and instantly blamed Tyga’s pot-smoking influences.

Kylie Jenner took to Twitter to refute the video, and insisted that in the video she was saying her chicken was “good as f—k,” and she wasn’t high. No one is buying it though. Kylie Jenner has cried wolf one too many times, just last week she finally admitted to getting lip fillers after she swore up and down for months that she had not had plastic surgery. The 17 year old also tried to deny her relationship with Tyga in the early stages – which also clearly turned out to be a lie, Kylie’s credibility is beyond shot.

Can we really blame Tyga for turning his 17-year-old girlfriend into a pot-head though? We have no doubt in our minds that they most likely get high together…but what are the odds that Kylie Jenner never smoked weed until she met Tyga? Really? Kylie was out clubbing and drinking in public before she was even old enough to drive. And let’s not forget Kylie and her sister Kendall Jenner were both partying at Justin Bieber’s Calabasas drug-den on a regular basis, where photos were leaked of marijuana paraphernalia everywhere.