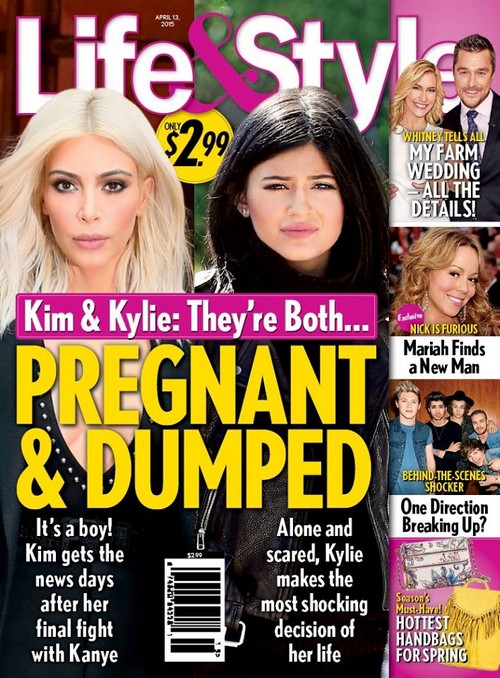 Kylie Jenner is pregnant with Tyga’s baby! Kylie and Tyga’s controversial relationship has been in the news for months, and for obvious reasons – like the fact that she is underage and it is totally illegal, and he left his wife Blac Chyna and their baby to be with Kylie. According to this week’s Life & Style cover, Kylie Jenner and Tyga have finally broken up, but she will have a constant reminder of her controversial fling with the rapper – because she is pregnant with his baby!

The April 13th cover of Life & Style Magazine’s headline screams that Kylie Jenner is “Pregnant and Dumped,” and goes on to say that “Alone and scared, Kylie makes the most shocking decision of her life.” L&S goes on to reveal that Tyga got cold feet when he learned that his 17 year old girlfriend was pregnant and began panicking about how serious their relationship was becoming. And insider dished to the tabloid, “The thought of Kylie being pregnant really scared the hell out of Tyga. The idea of having his baby only made Kylie feel even more attached to him. She thought her relationship with Tyga would last, and now she’s devastated about the split.”

According to the all new report, Kris Jenner was distraught when she learned that Kylie was pregnant with Tyga’s baby – and she encouraged Kylie to consider her options and pressured her to not have the baby. But, Kylie has decided to keep the baby – despite her momager’s protests. Of course Kris Jenner didn’t want Kylie to have the baby! She is only 17 years old, she has years of sex tapes, nude pictures, and weddings ahead of her – why would Kris want to kiss those paychecks goodbye just for a grandchild?

Are you shocked that Kylie Jenner is pregnant with Tyga’s baby? Or are you just shocked that she went this long without getting pregnant? Was Kris Jenner encouraging Kylie to not have the baby because she is greedy, or genuinely cares about her daughter? Let us know what you think in the comments below!