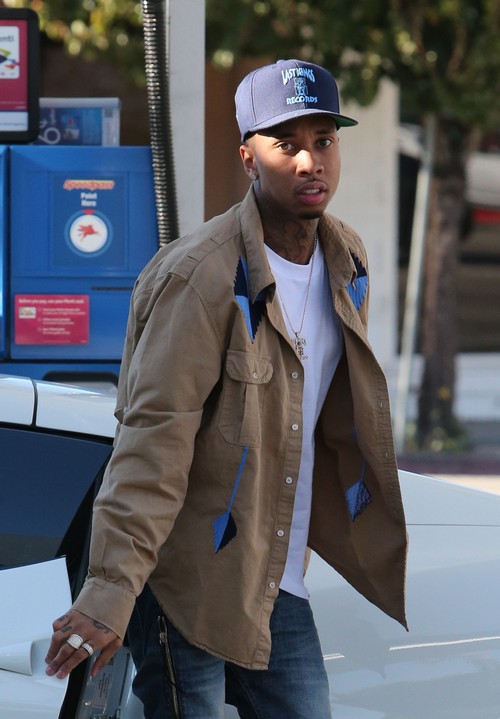 Kylie Jenner is throwing a fit because she doesn’t want to be in the Kardashian Christmas card unless her boyfriend Tyga is in the picture too according to buzz on the net. The problem is, Kim Kardashian is against having the “Rack City” rapper in the annual family photo and now there is a huge family feud on the horizon.

Apparently Kim Kardashian doesn’t want Kylie’s boyfriend in the annual family photo because she just doesn’t think the relationship is permanent enough. Kylie and Tyga have only been dating for about a year now. They may be practically glued to each other but that doesn’t constitute family according to a source close to the rapper.

That isn’t the only Christmas picture drama for the Kardashians either. Rob Kardashian is reportedly refusing to be in the family photo this year unless he gets paid a hefty hunk of change. As CDL reported earlier, Rob is feeling like he might be in demand right now as tabloids would be willing to pay top dollar for a new picture of him. If Kris Jenner wants her son in the family photo, she’s going to have to pay up. Knowing Kris Jenner, she’ll probably pay up.

As far as Kylie Jenner getting her way and posing next to Tyga? It’s unclear if that will go down or not. Over the years, a few non-blood related partners have posed on for the photo but it’s not very common. Some examples would be Lamar Odom and Scott Disick in 2011.

To be fair though, Lamar was (and still is) married to Khloe and Scott Disick had been with Kourtney Kardashian for several years at that point too. The point is, Kris Jenner doesn’t just let anyone in that family photo and Kim Kardashian is territorial over their sacred and often tacky family photo op.

Over the years, the annual Kardashian Christmas picture always included Kris Jenner and her girls, Kourtney, Kim, Khloe, Kendall and Kylie. Rob Kardashian was in the mix until a few years ago and he hasn’t been on the show or in the media at all.

Bruce Jenner has been in each of the over-the-top photos until recent years as well. Now we know why and maybe Caitlyn Jenner will make an appearance on the famous Christmas tradition this year.