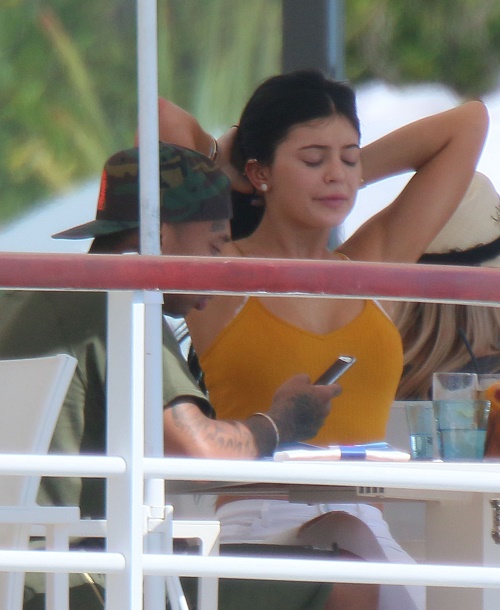 Would Tyga break up with Kylie Jenner for $250,000? Tyga and Kylie are in love, just ask them, and they are reportedly moving full-steam ahead with their plans to get married and elope when Kylie turns 18 years old in August. Kylie’s family is panicking. The last thing they want to see is Kylie make a huge mistake and marry the 25-year-old rapper, and Kim Kardashian is determined to intervene and break up the two lovebirds.

According to a new report, Kim Kardashian is so desperate to cut ties between Tyga and Kylie that she is willing to pay a pretty penny for Tyga to break up with her little sister and be out of their lives for good. According to a report from OK! Magazine, Kim Kardashian is scared that her little sister is “throwing her life away” so she is prepared to pay Tyga a quarter of a million dollars to make sure that doesn’t happen.

Tyga just scored his own reality TV show on MTV called “Kinging With Tyga,” so $250,000 probably seems like a joke. But, Tyga is reportedly broke, and has been living off from his teenage girlfriend for months now. He actually is headed back to court over $25,000 that he was ordered to pay a woman who sued for being sexually assaulted on the set of one of his music videos three years ago, and still hasn’t been able to cough up the cash. How greedy is Tyga though? Sure, he could take $250,000 and have instant cash. But, in the long run, if he stays with Kylie he will most likely get way more than $250,000 out of her.

What do you guys think, will Tyga take the money and break up with Kylie? Or does he actually love her? Do you think big sister Kim is overstepping her boundaries? How will Kylie react when she learns Kim tried to bribe her boyfriend to dump her? Let us know what you think in the comments below!