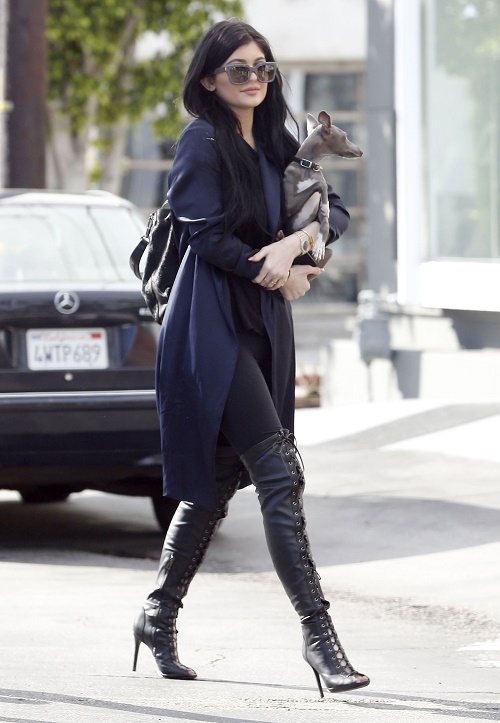 Kylie Jenner and Tyga are officially broken up – because he is still cheating on the KUWTK star with his baby-mama Blac Chyna. Who didn’t see that one coming? This month Blac Chyna released screen-shots on social media of text messages she received from Tyga begging her to get back together with him. Obviously, the revelation put a bit of a damper on Tyga and Kylie’s controversial relationship.

Kylie Jenner’s sisters and friends warned her for months that Tyga was playing her, but the clueless 17 year old was head over heels in love with the 26-year-old rapper and refused to believe that he was still hooking up with his ex Blac Chyna. When Chyna posted their conversations on social media – Kylie had no choice but to finally accept the fact that her boyfriend was being unfaithful.

According to our insiders close to Kylie’s circle, at first Kylie was in denial – and she totally believed Tyga’s explanations that the text messages were fake. And, just to prove that she was the only woman in his life, Tyga ran out and got her name tattooed on his arm. But the damage had already been done by Chyna and Kylie couldn’t get over the text messages that Chyna posted online.

Our insider dished, “Kylie wanted to believe Tyga – she didn’t want to know the truth. But, her big sister Khloe, who has had some experience with cheaters, sat Kylie down and finally talked some sense in to her. Khloe helped Kylie hack in to Tyga’s phone records through his email and they saw that he really had been texting Chyna and the timestamps matches the texts that Chyna posted online.”

Kylie bounces back quickly though, after promptly dumping her lying, cheating boyfriend the Keeping Up With The Kardashian star headed out for a night on the town with Chris Brown – because you know he is such a step up from Tyga. Do you think this is really the end of Kylie and Tyga? Will they wind up getting back together before the week is over? Or is Kylie already moving on with Chris Brown? Let us know what you think in the comments below!