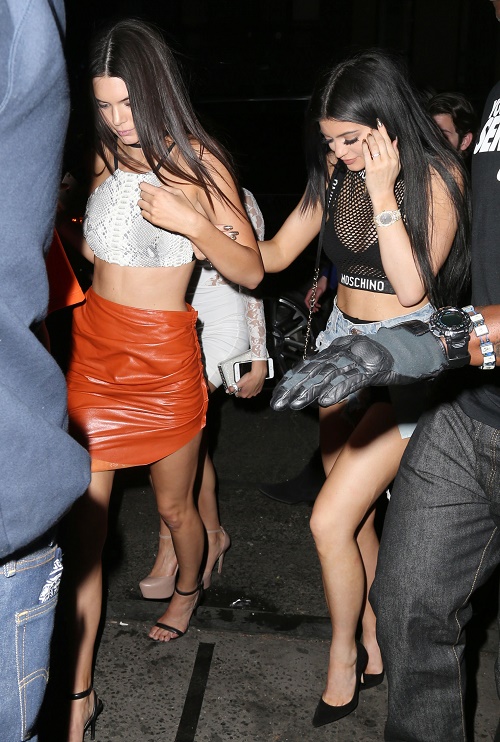 Kylie Jenner and Tyga are back on – the controversial couple attended Rihanna’s Met Gala after-party together on May 4. Did Kylie really forgive her 26-year-old boyfriend for cheating on her with his baby-mama Blac Chyna? Just last month Chyna leaked messages online of Tyga begging her to get back together with him and revealing that he still had feelings for her. Obviously, when the messages hit the internet, the 17-year-old reality TV star promptly dumped the two-timing rapper, but it looks like Kylie caved and got back together with him.

Kylie Jenner and Tyga skipped the actual Met Gala – but they weren’t turning down a chance to party with Kylie’s sister Kendall and her pals at the after-party. Insiders at Rihanna’s party revealed that Tyga and Kylie were all over each other, without a care in the world. If you didn’t know about their breakup, you would have never guessed that they were just fighting last week over Blac Chyna.

Its no secret that Kylie Jenner is getting totally played by Tyga, everyone seems to know that he has been cheating on her – but Kylie. As soon as Blac Chyna leaked the messages online, Tyga ran out and got Kylie’s name tattooed on his arm and she forgave him instantly. Apparently, some permanent ink is a perfect temporary band-aid on a doomed relationship.

Our insiders close to Kylie Jenner reveal that her sisters Kim and Khloe are working tirelessly to get Kylie to cut ties with Tyga. One source dished, “Khloe knows all of Tyga’s friends, and she knows that he is cheating on her little sister. She’s so fed up with Kylie for taking him back – she thinks it is an embarrassment to their whole family. How does it look that guys are totally disrespecting them and publicly cheating on them? The more Khloe talks badly about Tyga, the more appealing he seems to Kylie. If Kylie walked in on him in bed with another woman tomorrow, she would still forgive him, it’s really pathetic.”

It sounds like Kylie needs some serious counseling on self-esteem. Are you shocked that she forgave Tyga and got back together with him? Is their relationship doomed, or could they work it out? Will Khloe sabotage Kylie’s relationship to save their family the embarrassment? Let us know what you think in the comments below!