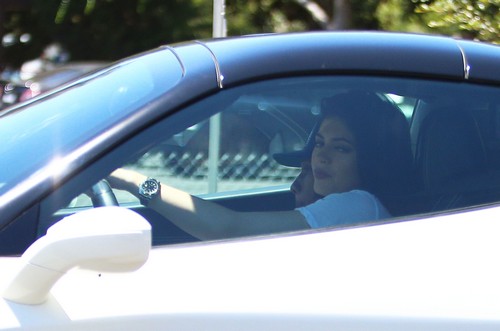 Kylie Jenner’s biggest tragedy of 2015: she’s forced to get rid of her Range Rover to make space for a new Ferrari and a G-Wagon. While the world loses its mind over terrorism and starvation and Donald Trump’s infamous speeches, a young celebutante weeps like a Sicilian mourner in a garage the size of Heaven. Yes, dear Celeb Dirty Laundry readers, the lifestyles of the rich and the famous is as intricate and as catastrophic as a broken egg at Walmart.

The 2014 Range Rover Autobiography is going for a whopping $173 000. According to TMZ, “Financing is NOT available. It’s a cash only deal. Kylie bought the Rover for $195k new and spent $25k tricking it out. It has 6,000 miles [on the speedometer].” Kylie’s love for automobiles – or rather her obsession with expensive ‘car-thingies’ – shouldn’t send us into a fit of altruistic, judgmental rage. Flaunting one’s wealth, ala Kylie Jenner, is akin to selling your collection of moss-ridden sloths to a homeless person, i.e. “What am I supposed to do with lazy animals? I want some food. Not sloths!”

Tyga, otherwise known as Kylie’s boyfriend, gifted her the sexy $260 000 Ferrari for her birthday. The G-Wagon – why does it sound like a geriatric Batmobile? – is hanging out at ‘the shop’ getting upgraded into Bumblebee from the first Transformers movie.

If you have enough cash and you’re interested in driving around Kylie Jenner’s ‘used’ Range Rover, then head on over to Kylie’s private broker (his/her whereabouts are currently unknown, because, you know, private) and buy that car with $173 000’s worth of ‘used’ pennies – it is a cash only deal after all.

Should we roast Kylie Jenner for her immature spending habits? Is Kylie an 18-year-old brat with too much money in her bank account? We’ll let you decide in the comments below.