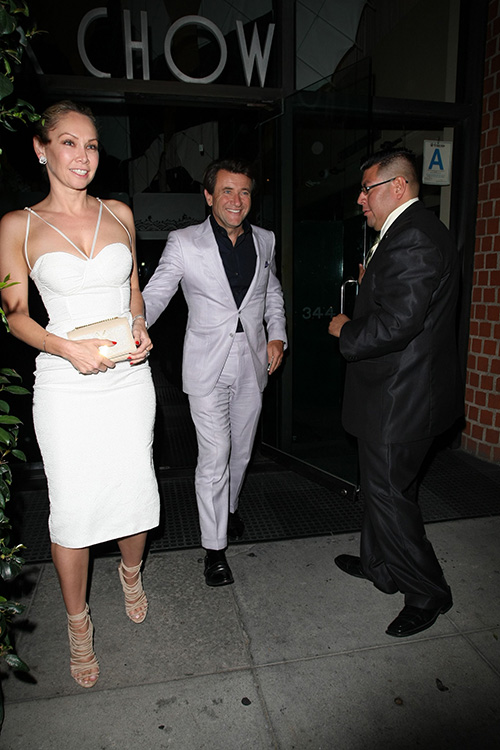 Dancing With The Stars rumors tease that there may be some trouble in paradise for Season 20 couple Robert Herjavec and Kym Johnson. The Shark Tank millionaire and pro dancer hit it off while they were partnered up last season, and have been dating ever since. This summer, Kym Johnson finally confirmed what DWTS fans have known all along – they are indeed dating in real life. However, there could be a break-up in their near future, and Kym Johnson is paranoid that Robert will lose interest in her, just like he did his previous girlfriend Danielle Vasinova.

What a lot of Dancing With The Stars fans don’t realize is that when Robert Herjavec joined the ABC dancing competition, he had a live-in girlfriend, Danielle Vasinova. However, he dropped her like a bad habit as soon as sparks began flying between him and Kym Johnson, and he even kicked her out of the love nest that he had her living in. Danielle revealed in an exclusive interview after her and Robert’s break-up that the Shark Tank millionaire didn’t even give her an explanation, he simply had his people evict her from the apartment. Vasinova went on to tell Woman’s Day, “I feel like a piece of meat he chewed up and spat.” In the interview, Vasinova warned Kym Johnson that it won’t be long before Robert grows bored with her as well.

Kym Johnson reportedly took Danielle’s warning about Robert to heart – and inside sources say that she is scared he is losing interest in her as well. A source close to Johnson dished to CDL, “Kym risked her career by dating Robert, no DWTS pro has ever officially stepped out as a couple with their partner. Now, she is beginning to wonder if she made a mistake. She has told her friends that Robert is pulling away from her. Her paranoia and insecurities are only driving a bigger wedge between them.”

Were you aware that Robert had a girlfriend when he joined DWTS? Do you think that Kym Johnson is just being paranoid, or will Robert grow bored with her soon just like he did with his ex-wife Diane Plese and ex-girlfriend Danielle Vasinova? Is there a break-up in their near future? Let us know what you think in the comments below!