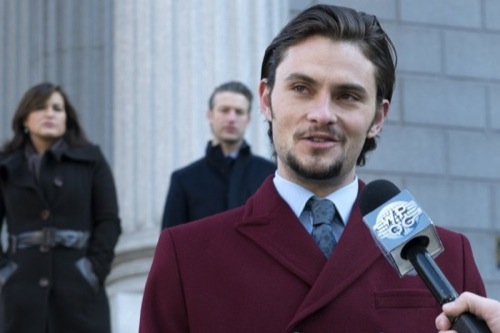 Tonight on NBC Emmy Award-winning producer Dick Wolf’s crime drama, Law & Order: SVU continues with an all new Wednesday January 14, season 16 episode 11 called, “Agent Provocateur” and we have your weekly recap below. On tonight’s episode, a teenager is found raped and left for dead after attending a party hosted by a movie star. Soon, missing security footage from the party turns up on a Web site run by a gossip mogul, whose refusal to share the source material lands him in court.

On the last episode, Atlanta’s Deputy Chief Charles Patton (Hamlin) and his newest detective, Reese Taymor (guest star Dreama Walker) visited New York for a law enforcement conference. When Reese was found unconscious in her hotel bathroom, she cried rape at the scene but changed her story when Sgt. Benson (Mariska Hargitay) arrived. When Rollins uncovered a personal connection to the suspect, ADA Barba (Rahl Esparza) seeked her help in the courtroom and she was forced to confront the demons of her past to stop a dangerous predator. Also starring Ice-T (Det. Tutuola) and Danny Pino (Det. Nick Amaro). Also guest starring Peter Gallagher (Deputy Chief William Dodds), Delaney Williams (Counselor John Buchanan), Jenna Stern (Judge Elana Barth) and Myk Watford (Captain Sam Reynolds). Did you watch the last episode? If you missed it, we have a full and detailed recap right here for you.

Tonight’s season 16 episode 11 looks like it is going to be great and you won’t want to miss it, so be sure to tune in for our live coverage of NBC’s Law & Order: SVU at 9:00 PM EST!

Tonight’s episode of Law & Order SVU kicks off with a teen girl being crammed in to a suitcase and being wheeled out of a fancy hotel. She appears to be dead, someone leaves her lying in the suitcase in the middle of the street. A cop arrives and rushes her to the hospital – they manage to save her life and get a pulse.

The next day the girl, Maddison wakes up in the hospital – Olivia and Nick question her, but she has no idea where she is or what happened to her. Maddison explains that she was supposed to meet a girlfriend and go see Wicked. She took a cab from her Uncle’s house on the Upper East Side. Maddison isn’t cooperative, she begs them not to call her mom in Atlantic City because she doesn’t want to get in trouble.

Fin heads out to the street where Maxie was left in the suitcase. He orders the patrol guy to get the street camera footage to see if they picked up anything. At the hospital, Madison tells Olivia that the last thing she remembered was getting in to a cab and the driver was Middle Eastern and forced her to take some pills.

Fin and Nick head to Madison’s uncle’s house and he insists that she is upstairs sleeping – he heads up to her room and realizes that she isn’t in there. He swears to the police that he though she came home – the last time he seen her she left to go see Wicked. They find the tickets on the night stand – and they tell hi Madison is at the hospital. He has an alibi, there is a man sleeping in his bed. He begs Fin not to tell his sister that he is gay.

Fin heads back to the police station and says that she lied to her uncle and told him she was going to Wicked and never went. They pull her social media and cell phone records and learns that she was meeting up with an actor that she met online, Scott Russo. At the hospital Madison’s mom is shocked that she met an adult actor online. She confesses that she went to the hotel to meet Scott and the last thing she remembered was him getting her a drink at the bar and then she blacked out and the next thing she remembers is waking up in the hospital. Madison’s mom orders the police to go arrest Scott – her daughter is just 15 years old.

Carruso and Fin pay Scott Russo a visit to question him. Scott insists that Madison is just a fan – he texted her and she responded and that is not a crime. Scott says that he had a drink with Madison and then he left the club, he insists that he never went upstairs to the hotel with her. Scott’s manager interrupts and says that they don’t have any time for this and the police can email them their questions. They head to the hotel to pull the security footage to see if Scott is telling the truth and learn that someone already pulled the security footage last night and told the hotel employee they were from the NYPD. Olivia gets some more footage from the hotel and they get a clear shot of the guy that took the footage but he has his face covered.

They decide to question other people at the party to see if Scott really left, or if he went upstairs with Madison. They interview Scott’s co-star Skye. They ask Skye if he left the party with Madison – Skye says that he isn’t going to lie. He has no idea where Scott went or Madison, he didn’t see either one of them leave. Two waiters at the party confirm that they saw Russo doing body shots off from Madison.

The press leaks a video of Madison and Scott making out in the hotel with Madison. And they have footage of Madison and Scott sneaking in to a hotel room together. They learn that the gossip site are the people that impersonated that NYPD to get the footage so they could post it on their website. The footage on the internet is enough for Olivia and her team to get a warrant and bring Scott in. Ironically they arrest him while he is promoting his film “Falsely Accused.”

They bring Scott in for questioning – he insists that the video that was leaked online was edited. He reveals that if they had seen the rest of the footage, they would have seen that he shut the door in Madison’s face and wouldn’t let her in. Scott reveals that he was having sex all night…with his married co-tar Catalina.

Olivia decides to try and talk to Madison again. She reveals that she followed Scott to his hotel room and she went in to his bathroom and took a handful of pills to calm her nerves. She swears that she had sex with Scott Russo and it is kind of fuzzy “but he was so gentle.” Madison insists that Scott would never hurt her. The DA tells them that they can’t press charges based on Madison’s statement – because she has changed her story too many times.

Olivia and Nick head to “LMZ,” the website that stole the security footage and posted it online. They give Lenny a warrant and tell him that if he doesn’t reveal the source that impersonated the NYPD and stole the footage – he will be under arrest. Lenny refuses to share the source or the rest of the video – so Olivia and Nick arrest him and bring him down to the precinct.

Fin and Carusso go undercover in jail and pose as inmates so that they can try to get some information from Lenny, from LMZ. He brags to Fin on tape that he has video on the “real dirt” that happened to Madison last night at the hotel. He brags that Scott’s manager gave him the PG-13 movie so that he wouldn’t leak the X-rated version.

They bring Scott’s manager in for questioning and order her to give them the rest of the missing footage. She swears that she doesn’t have the footage, she gave it to Lenny. Scott’s manager reveals that Scott called him at 1:00 AM because Madison overdosed in his bed, so she helped him clean up the hotel room and he wheeled the girl out and left her in the street. Now that they have the manager’s statement – they head out and officially arrest Scott for the rape and attempted murder of Madison.

Madison and her mom show up at the police station and Madison insists that Scott’s manager is lying about what happened. She explains that she didn’t have sex with Scott – she followed him to his hotel room and he was in there with another woman. She started crying, and then Scott’s co-star Skye found her in the hallway and comforted her and gave her pills and alcohol. They had sex, and then she doesn’t remember anything else. Madison cries that she didn’t tell the truth because she didn’t want Scott to know that she cheated on her.

Olivia and Fin pay Skye and Scott’s manager Lydia a visit. He says that he fell asleep in Lydia’s room – Lydia backs up his story. Olivia lies and says they have video footage of him rolling the suitcase out and inviting Madison in to his room – so Skye begins blubbering and confessing. Meanwhile, Scott Russo is released. He thanks Olivia and her team for helping expose Lydia, he never expected her to turn against him. Scott gives a cheesy speech to the screaming girls outside of the courtroom about how he was “Falsely Accused” just like his movie.