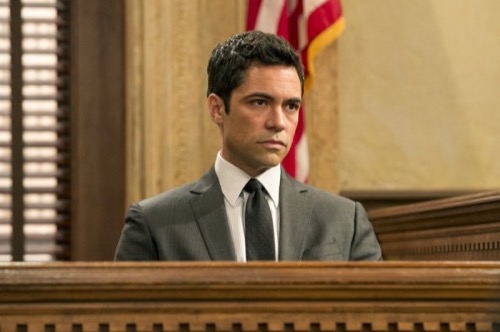 Tonight’s season 16 episode 12 looks like it is going to be great and you won’t want to miss it, so be sure to tune in for our live coverage of NBC’s Law & Order: SVU at 9:00 PM EST!

Tonight’s episode of Law & Order SVU kicks off with Nick’s father arriving at the police station and introducing himself to Olivia. She tells him to have a seat and heads in to the interrogation room to let Nick know that his father is there. Nick storms out of the room and demands to know what his father is doing there. Nick says that he is busy working, but his dad insists on taking him out to lunch. In the elevator Nick’s father reveals that he is getting married and he wants Nick to come, Nick argues that he hasn’t seen him since he was 15 years old and there is no way he is coming.

Nick heads back to the office and rants to Olivia that his father wants him to come to his wedding to a child bride. Olivia tells Nick that he needs to let go of his anger and forgive his father. Nick throws it back in her face that she hasn’t forgiven her father. Nick heads to his mom Cesaria’s apartment and runs in to Sonja and is shocked to see his daughter Zara. They came to town for the wedding. Nick is not happy to hear that they are all going to the wedding.

Nick heads back to the office and works late while his whole family parties at a club celebrating his father’s wedding. Nick’s dad catches his young bride-to-be Gabriella dancing with another man and freaks out, a brawl ensues. Zara calls Nick crying and telling him to come first. Nick rushes to the scenes and finds police and ambulances there – Sonja, his mom, and Zara are fine. But, his dad’s girlfriend is rushed out on a stretcher, and appears confused. She mumbles to Nicholas that his father is the one that beat her. Nick’s dad is dragged out in handcuffs and he yells to Nicholas that he is his son and he needs to help him.

Olivia heads to the hospital, she sees Nick in the hallway and tells him that he should go home. The police officers that were on duty take Olivia aside and tell her that the EMT heard Gabriella tell Nick his father hurt her. But, now she is changing her story. They think that Nick told her to change her story. Olivia visits Gabriella and she says that no one hit her, she says Nick’s dad Nicholas saved her from “some guy getting fresh” named Javier and when they got in a fight she hit her head on the wall. Gabriella begs Olivia to let Nicholas go and swears that he didn’t hurt her. Back at the police station, Olivia tells Nick that he is “back at the desk, until they get it cleared up.

Olivia has to go through protocol and they bring Javier in for questioning. He insists that all he and Gabriella did was some “dirty dancing,” and then she caught Nicholas watching them and freaked out and ran downstairs. Javier says that he was on the dance floor with Sonja, and Gabriella’s father Luis seen him. Fin visits Luis, and he says that Nicholas was downstairs with his daughter Gabriella all alone and he came back upstairs and put ice on his knuckles after he punched her.

Nick’s father Nicholas isn’t changing his story, he insists that he went downstairs and pulled Javier off of Gabriella. Nicholas’s lawyer points out that Gabriella isn’t pressing charges and the reason he was icing his hand was because he punched a wall. Later Nick visits his dad in jail and tells him to take a plea and not put everyone through a trial. Nicholas insists that he didn’t hit Gabriella and Nick storms out.

Later Nick learns from the DA and Olivia that his father is refusing to select a plea deal, and he has to testify in court what Gabriella told him before she went to the hospital. And, Olivia told the DA that Nicholas used to beat his mother. Nick head to his mother’s house and Cesaria and Sonja gang up on him and are furious that he is testifying against Nicholas in court.

The next day Nicholas and his lawyer meet with the DA and offer to plead guilty to misconduct, the DA turns them down. Nicholas brags that Gabriella and his daughter Sonja will both testify in his favor – so he will take his chances in court. They head to court, and Javier takes the stand and says that the last time he seen Gabriella, she was going downstairs with Nicholas and he came back upstairs and put ice on his hand. Gabriella’s father Luis takes the stand next and describes what happened the night Nicholas attacked Gabriella. Nicholas’s lawyer accuses him of lying on the witness stand because he didn’t want his daughter to get married/

The DA meets with Nick after court for drinks, and reveals to him that his dad is going to get off with probably just a misdemeanor without Nick’s testimony. He tells Nick that it is “his family and his call,” it’s up to him whether he wants to testify against his old man and put him behind bars.

The next morning Nick heads to court and decides to testify against his father Nicholas. His dad corners him before court and warns him that he is going to destroy their family. Nick takes the stand and describes in detail what happened when he arrived at the party and that Gabiella told him his father hit her. Nick reveals that he knew Gabriella was telling the truth, because whenever his father was jealous or felt threatened he would beat his mother Cesaria and him. Nicholas’s lawyer tries to discredit Nick and remind the jury that Nick has a temper of his own and is using the case to get back at his estranged father.

The next day in court Nicholas takes the stand and insists that Javier was groping Gabriella downstairs and he was just defending her. The DA points out that Javier had no marks on him, but Gabriella had a fractured skull. Nicholas maintains his innocence and swears that he would never hurt Gabriella, and the only reason Nick testified against him is because he “has issues.”

The jury takes 20 minutes to render a verdict, and then announce that they have found Nicholas not guilty. Nick heads back to the police station and is clearly not happy about the verdict. Olivia offers him a few days over but he declines. Nick’s dad stops by and says he wants to talk to his son, Olivia leaves them alone. Nicholas sits down and says that he is proud of Nick for finally sticking up to his old man. He admits that he lied in court because he is “too old for jail,” and apologizes for putting Nick in a horrible position and asks him if they can start fresh. Nick snaps that his dad is still lying and he isn’t going to change. Nicholas begs him to let go of the anger that he has for him and move on with his life.