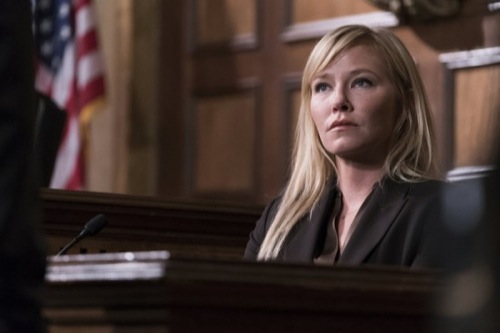 Tonight on NBC Emmy Award-winning producer Dick Wolf’s crime drama, Law & Order: SVU continues with an all new Wednesday January 7, season 16 episode 10 called, “Forgiven Rollins” and we have your weekly recap below. On tonight’s episode, rollins’ old boss from Atlanta visits New York City along with his newest detective, who is found unconscious in her hotel bathroom. The rookie detective makes a rape claim, but then she recants it, leading Rollins to face a dark part of her own past.

On the last episode, when a series of young, petite girls were assaulted in the early morning hours, Detective Rollins (Kelli Giddish) matched the pattern to several rapes she worked in Atlanta. When she found that the victims’ rape kits were never tested, Atlanta SVU Chief Patton (guest star Harry Hamlin) claims none of the cases were worth pursuing. Intense media scrutiny and the lack of a suspect brings the heat down on Sgt. Benson (Mariska Hargitay), who had to face Chief Dodds (guest star Peter Gallagher) and their commanders in a CompStat briefing. Meanwhile, a family court judge threatened to remove baby Noah from Benson’s care. Also starring Ice-T (Detective Tutuola) and Peter Scanavino (Detective Carisi). Also guest starring Myk Watford (Captain Sam Reynolds), Samantha Futerman (Annie Lin), Lou Martini (Dr. Joseph Conklin), Ebonee Noel (Ashley Miller), Peter Hermann (Counselor Trevor Langan) and Jayne Houdyshell (Judge Ruth Linden). Did you watch the last episode? If you missed it, we have a full and detailed recap right here for you.

Tonight’s season 16 episode 10 looks like it is going to be great and you won’t want to miss it, so be sure to tune in for our live coverage of NBC’s Law & Order: SVU at 9:00 PM EST!

Tonight’s episode of Law & Order SVU begins with a press conference with the Georgia police and NYPD about the rapist they just caught. Olivia and her team are not happy that Amanda’s old boss is taking all of the credit for catching the rapist. Amanda is obviously shaken up by her old boss Sam. Afterwards she heads to the bar and starts pounding drinks.

The next day at work Amanda shows up hungover with sunglasses on. Amanda and Olivia get a phone call that one of the female detectives from Atlanta was raped in her hotel room the night before. They visit Reese in the hospital – she lies and says that she wasn’t raped and she just hit her head on the sink in her bathroom and passed out. Amanda rushes out of the hospital room and starts crying. Reese finally admits to Olivia that she had too much to drink and the guy that raped her was Deputy Chief Patten – but she isn’t pressing any charges and she won’t testify against him.

Olivia fills her team in on the case – Olivia’s boss isn’t thrilled with the case because he knows it will be hard to prove since Patten is a deputy chief and Reese was drunk. Olivia asks Amanda if she thinks Patten is capable of rape. She insists she doesn’t know what goes on in Patten’s life, she says “you can never tell who is capable of what.”

Dobbs decides that he will interview Patten himself – he brings him in to the interrogation room. Patten confesses that he has been cheating on his wife with Reese, and they did have sex last night but it was consensual. Patten says that Reese is accusing him of rape because he wouldn’t leave his wife. Then Patten begins spewing about Amanda and says that she is putting everyone up to this because she has an axe to grind with him and threw herself at him in Atlanta. Patten excuse himself – but Dobbs tells him not to leave town.

After the interview Amanda storms out of the precinct. Fin follows her to the bar and demands to know what happened between her and Patten. Amanda explains that her sister got arrested, and Patten told her that if she had sex with him then his sister’s whole case would go away. Amanda insists that she wasn’t raped though – it was voluntary. Fin wants Amanda to tell Olivia what happened, but she refuses and warns that Patten plays dirty. She tells Fin to “let it go.”

Amanda heads back to the station and tells Dobbs and the DA that Reese is probably telling the truth and Patten has been a predator in the past. They can’t press charges against him though because Reese won’t testify. Amanda agrees to talk to Reese and try to get her to change her mind and testify against him. Reese rants that she isn’t like Amanda – not everyone thinks she is a slut like they do Amanda. Reese is floored when she learns that Patten is telling the police that she was having an affair with him, and she realizes that Amanda was a victim of his too. Reese agrees to cooperate with the police. Fin, Nick, and Dobbs heads to a restaurant where Patten is having dinner and arrest him for rape.

That night Amanda is out after dark walking her dog – one of the Georgia cops pulls up and tells her that she should take his advice and “let sleeping dogs lie.” Sam tells her that they know Amanda convinced Reese to testify and she needs to back off. Then he makes a pass at her and Amanda hits him and runs off with her dog.

Patten and his lawyer meet with Dobbs and the DA – they reveal that Patten will retire if they drop the charge. Dobbs doesn’t want to hear it, he says that the NYPD isn’t going to look the other way. They refuse to back down and aren’t folding. Patten insists that he is “straight as an axe and Reese got just what she wanted just like Amanda did.”

They head to court, and Olivia takes the stand and discusses Reese’s rape kit. Amanda is shocked when she shows up at court and sees that Patten’s wife Vivian is there to support him. Reese takes the stand and describes in detail what happened the night that he raped her. Patten’s lawyer tries to discredit Reese and asks her why she is a trained police officer and didn’t try to fight Patten off at all or leave any defense marks on him.

Amanda follows Reese in to the bathroom and tries to comfort her after the dramatic cross examination. Reese sneers “you convinced me to testify but I don’t see you taking the stand,” and storms out. After her chat with Reese, Amanda decides that she will testify against Patten too to help their case. Dobbs rehearses with her what she should say. The next day the DA asks the judge if they can submit Amanda’s testimony – but the judge won’t allow it. So, they are back to square one.

Patten takes the stand next – and he insists that he did not rape Reese and they had a brief affair. While Dobbs is questioning Patten and discrediting him, he starts holding his arm and stuttering and coughing. Patten’s lawyer rushes up to the stand and tells the judge to call an ambulance because Patten is having a heart attack.

Patten is rushed to the hospital and it turns out that he was just having an anxiety attack. Back at the station, Olivia calls Amanda in to her office and tells her that she is going to have to deal with what happened to her at some point. Amanda reassures her that she is “okay.” But, Olivia wants her to go to therapy.

Patten and his lawyer meet with the DA and agree that Patten will resign, and will plead guilty to 2nd degree sexual assault. They agree and Patten heads back to court and pleads guilty before the judge. Amanda watches on with her team at her side. When they leave, Nick is not happy that Patten is getting any jai time, but at least he is going on the sex offender registry. Nick and Fin offer to give AMand aa ride, but she says that she want to get some fresh air and leaves by herself.