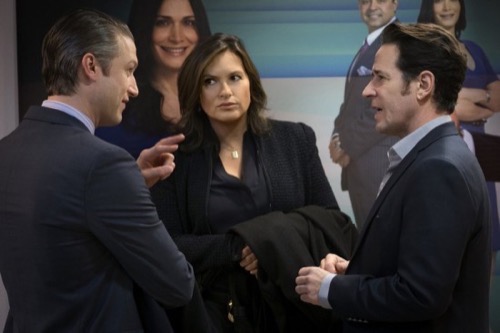 Tonight on NBC Emmy Award-winning producer Dick Wolf’s crime drama, Law & Order: SVU continues with an all new Wednesday April 1, season 16 episode 18 called, “Devastating Story” and we have your weekly recap below. On tonight’s episode, a college student makes a rape accusation in a TV interview, claiming she was gang raped at a fraternity house. Her story casts a national spotlight on sexual assault on college campuses, but her legal case is difficult for Barba to prove.

On the last episode, Detective Carisi’s (Peter Scanavino) sister Bella (guest star Marin Ireland) prepared for her wedding to fiancé Tommy Sullivan (guest star Michael Chernus) and the upcoming birth of their child. But when Tommy fell back into bad habits and accuses his parole officer (guest star Molly Price) of rape, Carisi must investigated whether the claim is real or just another one of Tommy’s excuses. Did you watch the last episode? If you missed it, we have a full and detailed recap right here for you.

On tonight’s episode as per NBC’s synopsis, “Detective Carisi’s (Peter Scanavino) sister Bella (guest star Marin Ireland) prepares for her wedding to fiancé Tommy Sullivan (guest star Michael Chernus) and the upcoming birth of their child. But when Tommy falls back into bad habits and accuses his parole officer (guest star Molly Price) of rape, Carisi must investigate whether the claim is real or just another one of Tommy’s excuses.”

Tonight’s season 16 episode 18 looks like it is going to be great and you won’t want to miss it, so be sure to tune in for our live coverage of NBC’s Law & Order: SVU at 9:00 PM EST!

#Law&Order starts with a real crime TV show covering a rape on a local NYC college campus. The women who is calling herself Jane. Olivia watches the show then gets a call saying the Mayor’s wife saw it and now they have to investigate. Rollins and Carisi go talk to the host of the show Skip but he won’t give then her real name. He tells them to talk to Professor Dillon on campus who referred the story to him. They go over but she also won’t help them out.

Olivia tries to work the college President but the woman shuts her down but does tell her that “Jane” only told her she had sex with one boy and says she was drunk. A protest starts on campus over all the uproar and she has to go handle it. Olivia and Carisi show up to the protest to see Jane reveal herself as Heather Manning. They get her to come down to the police station. She says the boys attacked her then threw beer cans at her on her way out to slut shame her.

They next go to the frat house to round up the suspects and search for evidence. The guys insist no attack happened and her date says they had consensual sex. They bring in the boys along with all their digital devices. They find that one posted a video that he later deleted of Heather leaving while they threw beer cans at her and yelled at her to go to church. They tell them it’s the gauntlet and is a usual thing even though it’s mean.

They get Heather’s panties and find semen and DNA from some other of the guys too. One finally admits that he also had sex with Heather after the first guy but says it was also consensual. The original guy, her date, says she wanted to go with the other guy and says she was acting the slut and now is trying to act the virgin. They perp walk the guys over for arraignment will tons of press outside snapping pics, video and asking them why they raped the girl.

Crime show host Skip is making the talk show circuit. He says three of the rapists were arrested and one is out of the country. He shows her at a press conference talking about how glad she is they were arrested. She says that six men raped her and Carisi says her quote “who wants to rape that” sounds strange. Skip says the cops have video of the assault and DNA on hockey sticks she was assaulted with. Olivia tells Barba none of this is true. She goes to ask about the six people.

Olivia brings in Heather and the professor and Rollins says they have to talk about who. The prof gets defensive. Olivia asks her to stop talking at rallies. She has appearances on Rachel Maddow and Anderson Cooper and won’t cancel them. Heather says she’s the face of a movement. Carisi says she’s tanking her own case. The out of the country rapist is now making an appearance. He says he was nine hours away when she was allegedly assaulted and they have video of it.

They separate Skip, Heather and the professor to go over details. Skip says he only talked to Heather and the prof. Carisi asks where the investigative in investigative reporting is. Skip says her story checked all the boxes but says he has to go work on a retraction. Heather talks to Barba and changes her story. She says she wasn’t sure if it was consensual and says she passed out. She says when she told her prof they hassled her on the way out, she said they probably all took a piece of her.

Barba goes to confront the professor. She rants about it not being about this case but about eliminating rape culture once and for all. Skip talks about how their story inspired a dialogue but many details were fabricated by Heather. He blames her for lying to them. Heather tells Olivia that because she was drunk she couldn’t consent. She says her date saw the other guy on top of her but then walked out. Olivia pretty much tells her that all her lies will prevent that one rape count from getting a conviction.

They drop the charges against all of them. The one actual rapist smirks. The news talks about the outrage on campus over the charges being dropped. Olivia goes to see the university President to say she’s story. Roberts says she should have listened more and Olivia says she should have acted less quickly. She tells Roberts that the one guy did rape her and she now has a dangerous predator on campus who may be emboldened to try it again. Olivia says this case set the clock back 30 years.