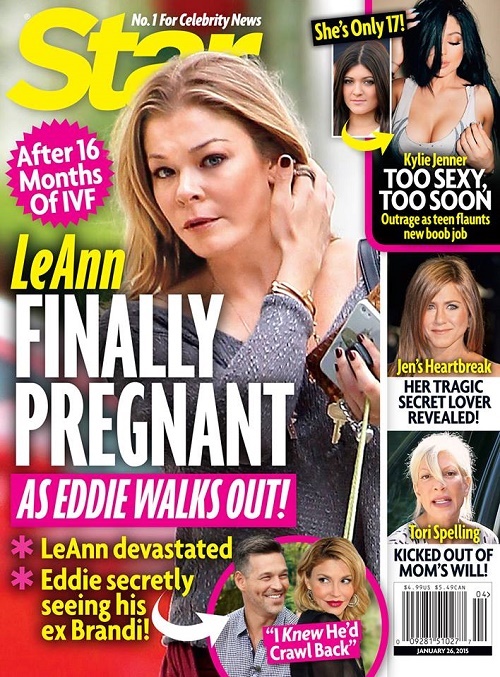 What goes around, comes around – isn’t that right? The report also claims that LeAnn has finally become pregnant, which makes the timing of Eddie’s betrayal that much worse. Although, if we’re being honest, who couldn’t see this coming from a mile away? Even LeAnn Rimes, as clueless as she is, knew that Eddie was cheating on her. Hence, the conveniently timed reports about how SHE was cheating on him, not the other way around.

Of course, if Eddie really is cheating on LeAnn with Brandi Glanville, we’ll hear no end of gloating from Brandi. She’s had to put up with LeAnn’s snide remarks, tweets, Instagram pictures, and all manner of passive aggressive feud-instigators. Of course, their feud is bound to get significantly worse now that this has happened, but in the larger scheme of things, it’s not going to change their dynamic all that much.

Star’s cover also has a featured story about Kylie Jenner, and how her sex symbol status and boob job is making others uncomfortable. Um, I think the entire Kardashian family has been making people uncomfortable for the entirety of their fame. The real shocker would be if Kylie DIDN’T make people uncomfortable, and with those lip injections, boob job, and all manner of ‘enhancements’, how could she not?

Plus, Tori Spelling has reportedly been kicked out of mom Candy Spelling’s will, which shouldn’t surprise anyone who’s been following the Spelling family drama.

What do you guys think about Star’s cover story? Do you believe that LeAnn Rimes got pregnant just as she found out about Eddie Cibrian dumping her go be with Brandi Glanville? Let us know your thoughts in the comments below.