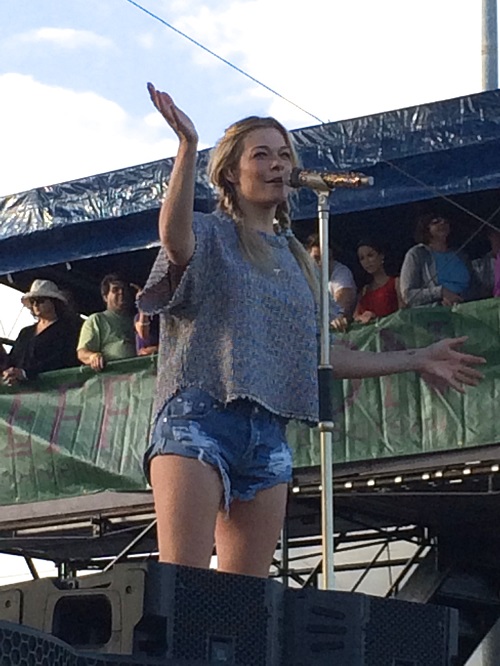 The night of the 57th Annual Grammy Awards, musicians, singers, and superstars lined the red carpet in Los Angeles. That was not the case for singer, LeAnn Rimes. Rimes spent last weekend’s Grammy Award evening in Louisiana…singing on a traffic median parking lot…across from a P.F. Changs.

Jefferson Parish is a quiet suburb outside of the city of New Orleans; they throw a free event for suburbanites who eschew the big city and Mardi Gras. They call it “Family Gras.” Their main drag is a 6-lane road across from the local mall. On that road’s thin strip of median, next to the Interstate exits, they built a stage for their family friendly event. The sun was out, the food was fantastic, the event perfectly organized, but it was more like a company picnic, not at all similar to Mardi Gras – and no comparison to the 57th Grammy Awards.

Before the show, Rimes hid out in the small portable lavatory trailer parked in the moving traffic on both sides of the median stage. She then stepped out in what can only be called “Daisy Dukes,” ankle boots, and an un-hemmed mid-drift top. Family. Friendly. Event. Jeans of the full-length variety would have been a better choice. After posing for photos with a few fans, Rimes rolled her loose ripped shorts even higher before taking the stage. There was no band.

Rimes reminded fans that she was singing at age 11, and had a hit song once, but there she was, on Grammy Night, in a narrow parking lot. Her 2nd husband, actor Eddie Cibrian, was nowhere in sight.

Her singing was better than expected, but her narcissistic offhand comments between songs, followed by her own laughter (the audience didn’t laugh with her), made for an oddly disjointed performance. I’d like to say I couldn’t see up her shorts, but unfortunately it was hit or miss. I watched tremulously as the hundred or so grannies in the first few rows looked up at the stage and prayed the setting sun blinded them to LeAnn’s inappropriate choice of attire or at least that she had waxed recently.

Rimes talked a lot. She likes to talk between songs, about herself mostly, how talented she is, and about her perceived past accomplishments and stardom. Note: Rimes has no record label. She especially likes to talk about her Grammy awards, which she mentioned several times, just in case we forgot. Yes, LeAnn Rimes, at age 14, won two Grammy awards in 1997. Per the Grammy’s website, she won Best New Artist and Best Female Country Vocal Performance in 1997, a nod to her youth, and her cover of the late great Patsy Cline’s mega hit recording, “Blue”. That was 18 years ago.

Event staff related that Rimes was booked to sing for an hour and half. But, as predicted by a disgruntled audience member, she sang for just under an hour with an encore of “Amazing Grace.” At that time, I was already retrieving my take-out from P. F. Changs but could still hear and see her clearly a few yards away. I had heard enough, and was afraid I had also seen too much.

Real Mardi Gras is in full swing in New Orleans proper. Celebrities, socialites, and debutantes are gearing up for the city’s secret masquerade balls, parties, and parades. Numerous big names are already in town or winging in to perform. LeAnn Rimes isn’t one of them. LeAnn Rimes wasn’t participating in Mardi Gras proper, and I’d wager she wasn’t invited to the Grammy Awards either.