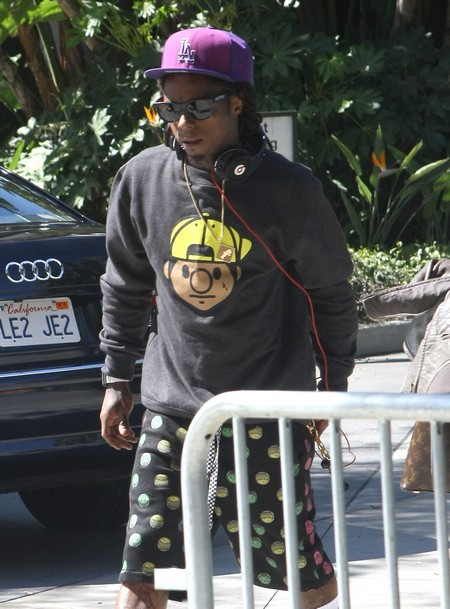 A war is brewing between rapper and Young Money Entertainment President Lil Wayne and Cash Money Co-Founder Birdman and what started as a war over Lil Wayne’s contract could dive into something far worse that could bring an even bigger payday then the lawsuit Wayne’s planning – a tell all about Birdman.

While Lil Wayne used a mixtape song, “Sorry 4 The Wait 2,” to publically dis Birdman and Cash Money Records, he may be planning something far more scandalous than his song and his lawsuit put together! Lil Wayne was signed to Cash Money Records at the tender age of 11 years old. And it wasn’t a matter of his mom or dad recognizing his talent and finding him an agent. Wayne, born Dwayne Michael Carter, had a rough upbringing with an uninterested mom and a cruel, uncaring step dad when Birdman found him and began working to make him a mega star. Wayne has recognized Birdman, né Brian Williams, as his father for basically taking care of him and making him what he is today… a world famous rapper and President of his own label, Young Money Entertainment, which both Drake and Nicki Minaj are signed to. But there are a lot of dark secrets that continually come up as people, who were at some point affiliated with Cash Money, have spoken out about and it’s not pretty.

Sadly, Wayne is on video coercing young rapper Lil Twist to become a man because, as Wayne says, he became a man at 11 when Birdman forced a woman to perform oral sex on him. Other stories have come out claiming Birdman, aka Baby, himself had forced sex on Wayne as a very vulnerable child when taking a bath. And rumors the two were gay after sharing a kiss on the lips in a 2006 photo. Former member of Cash Money, TQ, shared during a radio interview that Birdman and Wayne kissed on the lips all the time. While both Wayne and Birdman, aka Baby, have stated that they kiss as a close father and son—sorry…dads and sons just don’t kiss like that.

Now that the two are on the outs, and Wayne is threatening an $8Mil lawsuit and a pledge to take his Young Money artists Drake and Nicki Minaj, this could get very ugly and very personal. Wayne has a lot of dirt on Birdman, and regardless of whether or not he was involved with Birdman in a relationship, he would still be considered the victim as Birdman was a father figure to him and could have easily manipulated him. Brian Williams was 24 when he took in the young eleven-year-old Wayne.

So, while Birdman may warn that he’ll play dirty if Lil Wayne moves forward with his lawsuit and plan to take Young Money Entertainment favorites Nicki Minaj and Drake with him, Wayne could truly play much dirtier. “Sorry 4 The Wait 2” was just the beginning and first punch. Be prepared for this to get very real.