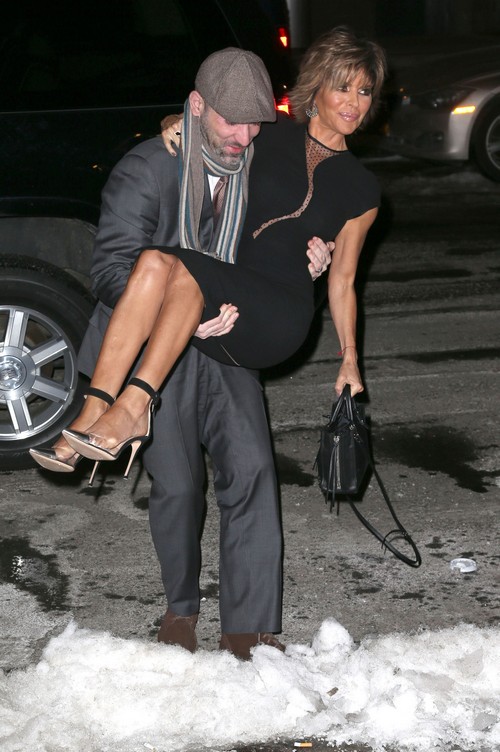 Lisa Rinna seems unable to carve out a storyline on the series and has resorted to obsessing over the lives of her costars, even worse this obsession has obviously brought her own insecurities and inner demons to the small screen. At first, it was just wild exaggeration of her own opinions, then gossip, but it soon escalated to clear statements of fact calling other cast members addicts, white trash, and alleging serious mental health diagnoses. That led to weird Tweets and Twitter wars defending then recanting her statements, which she quickly deleted. Fans can’t tell if she’s telling her costars off, her fans off, or censuring herself. She seems desperate to convince the public of something, but they’re not sure of what.

Most of Rinna’s statements would be considered defamation outside of reality TV contracts, but the confusing motive is what has people worried. No one on the show seems to know why she is attacking them or for the constant personality changes. No one had been mean to her, no one had fought with her, and everyone seemed to welcome her on the show.

Her obsession with labeling some of her costars as having alcohol related addictions, and relapses is being seen by many as cause for concern, and a projection of her own fears. Stars of the series such as Brandi Glanville, per her blogs and interviews have stated Lisa was “fun, cool, and nice”, when Rinna appeared as a guest on Glanville’s PodcastOne interview series, “Brandi Glanville Unfiltered”. Glanville recently stated that she and Rinna spent the day hanging out afterward. However, after seeing the mean spirited swipes Rinna levied at Glanville in her voiceovers and on Twitter, Glanville expressed her confusion on her Bravo blog, “… I guess that’s just one of her personalities or the characters she plays in her life?” Yesterday on, “The Steve Harvey Show”, Glanville was asked about Rinna, her reply, “I really don’t know. I feel like she’s always playing character of herself. I got along with her really well throughout the entire season and now she’s doing press, ripping me apart. So I don’t know. I don’t know who she is.”

Rinna was indeed seen as nice at the beginning of filming. However, when it was time to film the voiceovers, or commentary viewers see between scenes, she had changed. She has also changed on Twitter. Rinna is striking out to hurt her cast mates and her cast mates and fans are not happy. Many feel she is projecting her own family issues onto the cast. Rumors of infidelity and Rinna’s hostility and what some view as mental instability when confronted on the issue, have insiders concerned. There is a dark Rinna emerging, and she appears desperate, moody, violent and out of control.

Since the beginning of RHOBH Season Five, Rinna has been vacillating between trying to convince fans she’s lighthearted, fun, and as she tells Kim Richards on RHOBH, “I’m a nice person”. The problem is that her act isn’t holding up under the reality TV cameras. Fans of the RHOBH series see two Rinnas, one the happy go lucky mom and Hollywood wife, who pretends all is sunny and bright, and the darker Rinna obsessed with money, fame, addiction, and keeping Harry Hamlin happy.

On tonight’s episode, Rinna’s announced that her husband “Law and Order” and “Mad Men” actor, Harry Hamlin suffered from problems concerning alcohol for years, and says problems in Hamlin’s family with alcohol and addiction, “goes back 100’s of years”. Rinna then shocks her costars, Yolanda Foster and Kyle Richards by announcing, “Harry has been sober three years”. Rinna was unable to bring about a brave smile, and in a small voice announces, “After Harry stopped drinking, life changed, because he changed”. Rinna then appears to hold back tears. Sources close to the production say that allegations and public exposure of Hamlin’s infidelity and addiction are what have driven Rinna’s personality change.

The fears Rinna has been projecting onto RHOBH actresses, Kim Richards and Brandi Glanville, may come back to haunt her. Glanville, a survivor of years of Leann Rimes’ own blend of crazy, shrugged off newcomer Rinna’s allegations in her blogs and explained offhandedly to Bustle’s Allyson Koerner, “I’m a social drinker” “I don’t have a drinking problem”. Glanville went on to describe herself as a lightweight who forgets to eat and can be tipsy after two glasses of wine. But, while brushing of Rinna’s attacks on herself, part of an otherwise cheerful synopsis of last weeks episode of RHOBH, Glanville did lament Rinna’s recent attacks on her friend, Kim Richards, “the theme of public judging and invasive intrusion in the lives of people they barely know continued”.

Rinna’s problem isn’t Glanville. Rinna’s problem is actress, Kim Richards. Richards is seen by most RHOBH fans as the quiet one, the one who is constantly berated by her sister Kyle Richards, folds it inward and lets it slide. Not this time. Sources on RHOBH say that Rinna’s constant bombardment of Richard’s sobriety and intrusion in her family’s private life off camera have unleashed a new Kim Richards who is no longer content to take the weeks of Rinna’s unprovoked attacks lying down.

Lisa Rinna attends a viewing of “Watch What Happens Live” in New York City, New York on February 24, 2015. Lisa Rinna’s driver had to carry her over the snow. FameFlynet