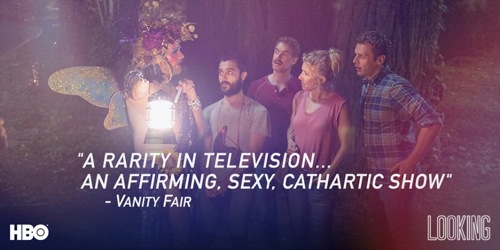 Tonight on HBO Looking continues with an all new Sunday January 18, season 2 episode 2 called “Looking for Results,” and we have your weekly recap below. On this evening’s episode, Patrick [Jonathan Groff] and Kevin [Russell Tovey] happily recall their childhood obsessions, but the former’s mood turns darker when he’s confronted with a health scare. Meanwhile, Dom [Murray Bartlett] inspects a possible location for his Portuguese take-out restaurant; and Augustín looks forward to a rendezvous with someone he met at the Russian River.

On the last episode, Patrick (Jonathan Groff), Agustin (Frankie J. Alvarez) and Dom (Murray Bartlett) headed to Russian River to stay at Lynn’s (Scott Bakula) weekend cabin for relaxation and bonding. Though Patrick wanted to lay low, the guys ended up at a bacchanalian party in the woods after running into a Faerie. Meanwhile, Patrick mulled over what he wanted from his life in the city, and Dom looked for clues in the house about Lynn’s old life. Did you watch the last episode? If you missed it, we have a full and detailed recap right here for you.

On tonight’s episode as per the HBO synopsis, “after reminiscing over their childhood obsessions, Patrick and Kevin (Russell Tovey) decide to develop a gay game app on the side, but Patrick soon descends into a panic spiral when he discovers a small rash. Dom scopes out a location in the Tenderloin for a peri peri chicken take-out window; Doris (Lauren Weedman) is chatted up by a cute political aide; and Agustin makes plans to meet up with Eddie (Daniel Franzese), the “bear” he met at Russian River, but gets sidetracked by an old co-worker.”

Tonight’s episode begins now – Refresh Page often to get the

Patrick opened tonight’s episode of “Looking” in Kevin’s bed. The same Kevin he’s regretted sleeping with everytime he’s had a slip up. Yet, rather than be embarrassed or even self-conscious for that matter, Patrick actually wants to spend more time with Kevin. Not less!

The guys have been thinking about creating an all new game. And they want to start this project together.

However, before they can start talking about the gay app they want to create, they have to figure out their relationship. Because Kevin was pretty freaked out when Patrick admitted to him he told his friends about them. And that more than anything told Patrick how Kevin saw him. Though, at that point he didn’t want to admit to a thing. Even if it was only to himself.

Otherwise, after Kevin had finished his freak out, Patrick then reassured his sometimes lover his friends weren’t gossips. He swore they weren’t going to be telling any and everyone about them. Yet Kevin was still worried and he let on to how much he was nervous after he caught Patrick whispering with someone at the office.

Kevin had immediately assumed Patrick was discussing when he was in fact trying to cover it up.

So, really, Kevin was being pretty clear about their relationship. And later, after he had filled in his friends about what’s been happening, Dom and Agustín had to be the ones to bust his delusional bubble by giving him a rude awakening. The guys told Patrick he’s someone’s dirty little secret. Which of course they found funny but they also wish he had mentioned something about the secret part a tad earlier for it seems Agustín had at least told one other person about Patrick’s afternoon breaks at work.

Doris knows and not that surprisingly – she refused to be discreet about knowing. She literally came right out and told Patrick he was having an affair with Kevin. And at first Patrick wanted to ignore her but eventually he realized she had a point.

Luckily, though she didn’t get the chance to beat him over the head with it. Doris would have probably kept on reiterating her point (just cause) but a cute guy ended up chatting her up and once he entered the picture – she naturally forgot all about her friends. And henceforth them fend for themselves.

However, that turned out not to be a good idea because after they had spilt up – Agustín went off the rails and was later found by Richie passed out in front of a convenience store. And as for Patrick, now that he knows his relationship with Kevin is tawdry, he started to doubt the other man.

And soon he began worrying about a rash so he got an HIV test done. Then, when he was done with that, he went and told Kevin he had done the test. He wanted Kevin to know he feels like he’s in this on his own and when Kevin finally saw the toll their affair was having on Patrick – he then was the one that had to reassure.

He did a dance he was embarrassed about in front of the whole office and he did that to show Patrick he was worth doing that for.