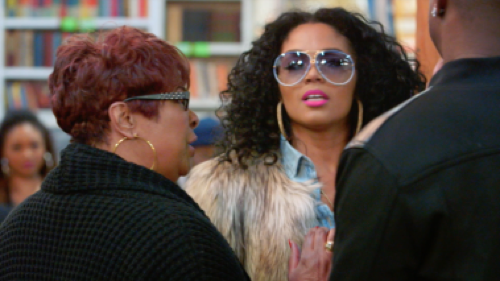 Tonight on VH1 their series Love & Hip Hop Atlanta continues with an all new Monday June 8, season 4 episode 7 called “The Truth Hurts” and we have your weekly recap below. On tonight’s episode, Margeaux Simms and Nikko London take issue with Mimi Faust’s sex tape saga

On tonight’s episode as per the VH1 synopsis, “Margeaux and Nikko take issue with Mimi’s sex tape saga; Joc tries to make nice with Khadiyah; and Joseline learns that Stevie has been working with other artists.”

Mimi is mad that Nikko has brought Margeaux to Premadonna’s waist trainer fashion show as his wife after keeping her a secret for years.

Margeaux tells Mimi that her fiends don’t know the truth about her, that she planned the entire sex tape. Mimi tells Margeaux to keep her hands out of her face, but Margeaux keeps putting her palm in her face.  Mimi storms off, with Margeaux yelling at her to be a woman and own up to it. Mimi turns back and continues to argue with Margeaux as Nikko continues to stand right there watching awkwardly. Mimi says that Margeaux is mad she isn’t reaping the benefits of the sex tape. Margeaux calls Mimi a coward as she storms off again.

Kirk Frost is in the car with Ashley when he finds out that Rasheeda is selling his stuff in an auction.

Margeaux goes to Nikko to talk about Mimi. Nikko asks her why she told Mimi something that he told her, and she says she never promised him that she wasn’t going to say anything. He says that because they have a book deal together, Mimi could refuse to finish her book, in which he has a stake, out of spite. Margeaux asks him if he cares about his reputation, saying he just cares about money. He says he doesn’t need stuff going back to her, he needs her to do the book. Margeaux says that isn’t going to happen because now she knows.

He says he has a secret weapon which will vindicate him and expose Mimi. He says the person who brokered the deal between him and Mimi is the missing piece of the puzzle.

Mimi spends time with her daughter, saying in confessional that Margeaux and Nikko can live happily ever after. Stevie J’s life is back to normal as his legal issues are being resolved.

Mimi tells Stevie J about the fight between Jessica Dime and Tiffany Foxx when she took them to the studio to meet with Jazze Pha because he was in rehab.

She also tells him about her own fight with Margeaux at the fashion show. Stevie J says he will take care of it, but she tells him not to get involved with anything. She says in confessional that she isn’t tellinh Stevie J that Nikko is still pushing her about her book because she doesn’t need him going back to jail for fighting someone.

Rasheeda says in confessional that she is auctioning off her husband’s prized possessions to make back the money he stole from her which prevented her from opening her store.

Kirk busts into the auction and demands that everything be brought to a halt. She tells the auctioneer to keep the auction going.

Rasheeda’s mother asks Ashley who she is, and she tells her not to address her. Ashley tells Rasheeda that it’s not her fault Kirk cheated on her. She tells the girl she doesn’t have two nipples to rub together or a record deal.  Rasheeda explains to Kirk again the issues she had with him regarding the fact that he used money out of their business accounts that he didn’t need to use, preventing her from starting her business. Kirk storms out.

Mimi tells Ariane that she is going to fulfill her obligation to produce books by writing three children books, to prevent Nikko from profiting off a book of her life story.

They discuss Margeaux’s allegations at the fashion show. Mimi says the only thing she and Nikko agreed to do was film themselves and that Margeaux sounded like she had someone in her ear insisting that the story of her orchestrating the sex tape is true. She calls Nikko “manipulative” and Ariane agrees.

Mimi tells Ariane that Nikko was taping their phone conversations when they were together, something he told her but now acts as if never happened. She calls Nikko a “thirstbucket,” saying he will get his three books and then get out of her life.

Khadijah has packed her bags after seeing the tape of Yung Joc and Sina. She goes to the spa after receiving a free gift certificate in the mail and is surprised by him. He insists that he “did not smash” Sina and she doesn’t believe him, saying he now has to face the consequences for his actions. He pulls out keys to his house, saying if she doesn’t accept them, he will leave her alone. He says it is the only way other women will respect their relationship. Khadijah decides to consider what he has said, but go back home alone for the night.

Joseline says in confessional that she gives Margeaux a “standing ovation” for telling everyone at the party about Mimi’s lies. She says to Karlie that she doesn’t understand why Mimi can’t own up to making a sex tape.

Karlie tells Joseline that Stevie J is working with female artists, which pisses Joseline off. Joseline says that he needs to respect their marriage and only pay attention to her, and that the wedding is now off.

Rasheeda isn’t speaking to Kirk after the auction. He tells her that what she did was wrong, and she says she wanted him to understand and see what she wanted to do. He tells her not to touch his stuff anymore because it’s disrespectful. She says she admits it was wrong, but she had to do something. She says what really took her over the top was Ashley’s disrespect. She says she’s two steps away from firing Ashley. She says Ashley coming at her sideways which makes her wonder about if they’re smashing. She says he needs to get a handle on her or else her contract will be burnt up.

Mimi has asked Nikko to meet with her to talk about her book. He tells her that the other night at the party he was just trying to be classy and have everyone meet. She says she isn’t here to talk about that and wants to get to business.

He says at least he was man enough to help her with her life unlike Stevie. She says the fact is that he lied about his life for two years, but he says that she’s a liar because she lied about the sex tape. He says in confessional that he’s going to renege on their pact the way she did about their contract.

He tells her he’s coming clean about it, because it was something she orchestrated. Mimi storms out, first dropping the horribly-drawn “children’s books” on the table before him. He goes outside as she walks away, yelling at her to stop playing games before he exposes the truth.

Joseline is mad at Stevie J, which he notices and they get in a fight. She throws her juice at him, saying “f**k your wedding, f**k you too.” She is restrained by guards as she calls him a piece of trash. She walks up the stairs, calling him a b**ch and a piece of trash.