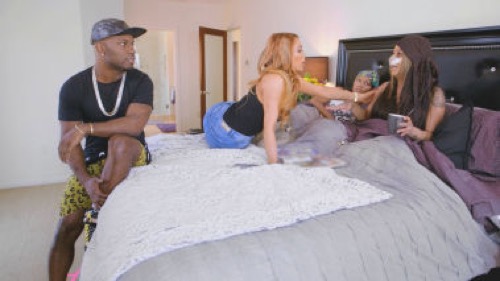 Tonight on VH1 their series Love & Hip Hop Hollywood continues with an all new Monday September 7, season 2 premiere called “The Real” and we have your weekly recap below. On tonight’s episode, in the Season 2 premiere, Moniece “Kali” Slaughter introduces a familiar face as her new boyfriend.

For those who don’t know, VH1’s “Love & Hip Hop” docu-soap franchise heads to Tinseltown to follow a group of rising stars and starlets fighting for their chance to make it in the entertainment capital of the world.

On tonight’s episode as per the VH1 synopsis, “in the Season 2 premiere, Moniece introduces a familiar face as her new boyfriend; Miles attempts to keep his relationship a secret; and an argument erupts between Princess and Ray J about their relationship.”

Teairra, Apryl and Moniece hang out at the beach.

Moniece says that she is seeing someone who will remain unnamed for now, but is coming into town this week. She says she is in love with the mystery man.

When asked about Ray J, Teairra says she is completely done with him after everything that has happened between them.  The three gossip about a fight that Princess and Ray allegedly got into in New Orleans, which resulted in Princess being arrested.

Teairra says karma is a bitch, bringing up the rumors that Princess was running around making about her getting into fights.

After returning from her grandpa’s funeral in Houston, Hazel goes to the studio and talks to Milan.She tells him that Teairra reached out to her after she posted on Instagram about her grandpa’s death. She says she thought it was big of her and shows that she still has a heart. She says that for her sanity she is going to believe that Teairra is being sincere, and will see how it goes.

She asks Milan about his relationship, and says he’s in love, ready to get married and have kids. He says he wants to see where she is so they can move on.

Before Hazel leaves the studio, Milan says that he wouldn’t talk to Teairra if he were her but it’s her life.

Ray and Princess are done after the disastrous business trip in New Orleans. Princess says in confessional that she caught him trying to hook up with strippers in his hotel room, which resulted in a fight that sent only her to jail. She says that Ray J then went to TMZ and told them a false story about her injuring him. Ray J comes to see Princess, ready to apologize and make up.

She asks him if it’s normal for him to invite strippers to his room when he goes out of town. “What are you talking about?” He says. “You don’t know what you’re talking about.” He tries to tell her his version of events, and she cuts him off at first, saying she doesn’t need a rundown of what happened because she was there and ended up in jail over it.

He says that the real story is that he got caught up with the strippers on his way back from picking up soul food for her, and that the cops came when the party got too rowdy.

Princess asks him who he is, saying that she doesn’t know he is anymore because he said he was going to change his ways but he is bringing strippers over to his room and cheating.

Princess breaks down crying, saying she is not going to be going home but rather stay where she is for a while. Ray J crawls over to her on his knees and tries to comfort her. She tells him she needs him to be serious with her and stop playing around. He says that all she has to do is forgive her one more time.

A single Nikki comes to Omarion’s concert and chats with Apryl at the bar.

She tells Apryl that she is working on her lingerie line. They joke that Apryl needs some of that lingerie, and Apryl tells her that her and Omarion’s sex life is kind of suffering because they don’t have time. She says their baby will stay up until his parents go to sleep and she isn’t going to have sex while her kid is up.

Nikki suggests that she pop up on him and take charge to get what she wants. Nikki says she’ll give her some of her lingerie.

Moniece goes to pick up her beau at the airport. Rich emerges from the airport doors, and I am just as disappointed as you are at this revelation.

Ray J has Princess meet her on a yacht so he can beg for her forgiveness some more.

He claims to have an “addiction” and that after he performs he gets sucked into the after parties and the lifestyle, something he is trying to control.

Princess says that she thinks he just likes doing it behind her back, which he vehemently denies.

She says that maybe he should just try to be single. He confidently vows to her that he is done with that life.
He asks her what he has to do to get her back, and she says that he should get rid of his apartment.

Ray says he used the apartment to party and bang a lot of women, acknowledging that isn’t what she wants to hear. However, he says, now is the time to step up to the plate and show her he loves her. “Fuck that apartment,” he finally says. “I’m done.”

Apryl is taking matters into her own hands and trying to get some d at Omarion’s rehearsal. She got their son a babysitter so she can get what she wants.

She sits Omarion down in a chair and dances to “All Hands on Deck” by Tinashe (am I the only one that does not perceive the lyrics of this song as sexual but rather depressing?) and they go to the women’s dressing room.

Amber and Miles are two random performers I’ve never heard of who are being shown recording in the studio. The two are a couple who have been working on music together for a long time. Amber says in confessional that Miles has been distant lately and she needs to figure out what is going on. In the studio, she brings up that he hasn’t been around lately. He says he is trying to figure out what he wants because they had envisioned themselves being signed to a label by now.

In confessional, however, Miley admits that he has fallen in love with someone else and he is going to tell Amber the truth. He says that now just isn’t the time.

He tells her that he needs time to figure stuff out, and she asks how long it’s going to be. He acknowledges that he is being selfish, and that he isn’t trying to make her wait. She tells him to go, then, and says that she is going to keep it moving.

Apryl holds her party, and tells Princess that Teairra is coming. Princess says she wants to speak to her because she’s heard the things Teairra has been saying about her and doesn’t know what’s going on. Apryl tells her she doesn’t really think the issue is her, but rather the rumors.

Princess sits down with Teairra at the party. Teairra tells her she would never have come out with violence if her man had protected her. She says that all the news she hears about Princess and Ray is about violence. Princess says that the stories are lies, and that Ray took the story and ran with it. Teairra says in confessional that she knows Ray feeds info to the press so she can’t blame her for that.

Miles reveals in confessional that the person he is in love with is Milan, another man. He says that Milan is the first man he has ever been with and probably will be the last because he’s in love with him.

The two of them are chilling in bed and talking about what they are going to do when Milan suggests they do something outside the house. Miles says he’s not comfortable with that because he’s a rapper in Hollywood and his friends, family and other loved ones do not know that he is with a man.  Milan asks Miles what he needs to do to be at the point he is at, and he says he doesn’t know when he’s going to get to that point. Miles says he isn’t ready and doesn’t know when he’ll be ready to come out.

Ray nurses his fake addiction by blowing Princess off and throwing a party to wrap up his partying ways, which he lied about by telling Princess he was going to the studio to work late.

Ray nurses his fake addiction by blowing Princess off and throwing a party to wrap up his partying ways, which he lied about by telling Princess he was going to the studio to work late.  Princess, however, receives a text asking if she’s coming to the party, and decides to roll up.

Ray J says this party was a finale. Princess says she’s glad he got his finale out, and now he can be alone. Ray J claims that this is who he is and this is how he turns up.

A stripper makes a comment to Princess (“you got some dirty ass socks on”). Ray J weakly discourages the woman from doing that, and then Princess lunges across the room, ready to beat her ass. She is separated from the woman while calling her a “bum ass bitch” repeatedly.