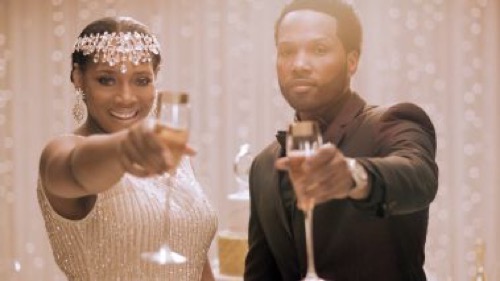 Tonight on VH1 their series Love & Hip Hop continues with an all new Monday May 25, special episode called “The Wedding” and we have your weekly recap below. On tonight’s episode, Yandy Smith and Mendeecees Harris finally get married.

For those of you who don’t know, is an American reality television series on VH1. It chronicles the lives of several women in New York who are involved with hip hop music.

On tonight’s episode as per the VH1 synopsis, “Yandy and Mendeecees join together in marriage after overcoming many obstacles.”

After eight long years together, Yandy and Mendeecees are finally getting married on tonight’s Memorial Day Special.

However the lead up to the wedding has not been easy. There’s been several arguments (some of which were quite brutal) and there has also been some unfortunate legal troubles with the law on Mendeecees’s part. Yet, despite everything that’s gone on before, Yandy is getting the wedding day she’s always wanted. And as for her fiancée, it seems like Mendeecees is the one stuck with the bill. What with the way he’s complaining about the price of it all.

Frankly Mendeecees would have preferred it if they had just had a simply wedding. You know possibly down at the court office. But Yandy wanted something else and VH1 is deciding to go with her idea. For not only is Yandy’s wedding a huge affair but it’s essentially a red carpet event with the who’s who of reality TV.

And I’m not even kidding about the wedding being an event. There were literally stars from Mob Wives and all three versions of Love & Hip Hop walking around and doing interviews while they waited until the wedding began. Plus let’s not forget the voting portion of tonight’s episode.

There was live voting throughout the special so that the audience could pick certain things involving the wedding. Like the bride’s dress for example. Normally no bride would leave that up to chance yet Yandy simply couldn’t choose between two Pnina Tornai dresses on her own. So now she’s left it up to voters to help her choose.

And while she waited for their decision, Yandy chose to hang out with Kandi Burruss from “The Real Housewives of Atlanta” and Joseline Hernandez from “Love & Hip Hop: ATL”.

Hence the ladies were discussing sex toys, namely the one that Kandi’s company produces, when the rest of us were given an insight to everything that had happened behind the scenes. Like did you know that Yandy wants to have two more kids? Apparently it was a desire of hers to have them both in the next two years but Mendeecees had to talk her out of that.

His legal problems are far from over so Mendeecees doesn’t think bringing in even more children is a good idea. But will be interesting to see who will ultimately win that fight. As you may recall their children so far weren’t all planned out yet there they are.

Thus who knows what can happen in the next two years!

Or for that matter what can happen on the wedding day. Some background footage ended up revealing the strife between Yandy and her future mother-in-law in the epic build up. And it looks like their relationship has taken a turn for the worse. Where before they only occasionally bumped heads, there was an all-out disrespect on both ends when it came to the actual wedding planning.

See Judy for the most part was not included in the planning. And, as the future mother-in-law, even Pnina thought it was odd that Judy wasn’t there during the dress fitting. So what’s really going on between the two women?

Judy has often been referred as being overbearing but seriously that’s nothing new. And if she was really such a problem then why didn’t Yandy voice some earlier concerns? Hence Mendeecees still would prefer it and also thought it possible for Yandy to find a way to handle his mother rather than ignore her. Yet when Mendeecees did choose to include his mother, like shopping for his wedding tux, Yany went out of her way to basically run from the older woman.

Thereby making her future husband upset with her.

Out of all things that had happened such as Judy’s number getting blocked or Yandy barely saying anything when she’s around – the running away part was what caused an issue. Naturally actions like that made Mendeecees question whether or not he wanted to go through with the wedding. Because it’s not like he was going to cut his mother out of his life.

But Judy was just one of the many subjects the “happy” couple fought about.

For Mendeecees is going to jail though luckily not for long. He later admitted to Yandy, after she had been reading one too many blogs, that he had taken a plea agreement. And what that means for them is that jail is definite.

He will be going and if his luck picks up then maybe, just maybe, he won’t have to spend the maximum five years inside of a cell.
And, yes, this decision is bound to tough on his family. Though he didn’t agree to it on a whim. Sadly if he hadn’t taken the agreement when it was offered (and Yandy wished he hadn’t) then Mendeecees could have been sent away for up to twenty years. And that was merely risk he couldn’t afford to take.

Mendeecees is not a career criminal. He hasn’t spent his whole life in and out of jail. And prior to this, he only had one offence on record. So in the end he agreed to plead out and hopefully Yandy can continue to be strong for her family.

But if this past couple of years have been proof of anything then it showed Yandy can handle her own.

And when her wedding finally began, (after nearly two hours of listening to commentary that could rival a royal wedding) it was just as she imagined it. Her father still walked her down the aisle though for a while there she wasn’t sure that would happen with his recent leg amputation. But it did! And her dress, the one her fans chose for her, of course was lovely. She ended up wearing a bejeweled corset that could have only been a Pnina dress. Then she topped off her look with diamond jewelry that included an art deco diamond headband. Which by the way had more bling than the one Kim KJardashian wore in her wedding to the “nuisance”.

Furthermore, Yandy allowed things to happen without a plan. Hence she let a few things slide. Like the wedding tux for instance. Apparently she had dream of what she wanted it to look like but ultimately Mendeecees was allowed to wear a blue tux for the ceremony and no it did not come with the traditional tails that Yandy was initially pushing for.

Also the couple each wrote personal vows. And K. Michelle sang while the bridal party was coming down. That in addition to their children all playing a part is what gave the wedding a special touch.

And so I personally am wishing this couple nothing but the best. They’ve overcome most obstacles many people wouldn’t face and they appear to have come out stronger because of it. So here’s to no one screwing it up!