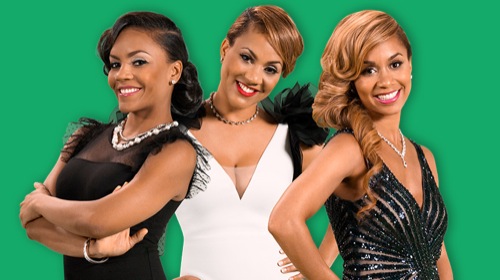 On WE tonight Love Thy Sister airs with an all new Thursday January 8, season 1 premiere episode called “Meet The Ruckers,” and we have your weekly recap below. On tonight’s episode, a reality series about three African American sisters from a prominent Southern family begins with an introduction to Ellen Rucker Carter.

For those of you who don’t know about the show, this reality series is about three African American sisters from a prominent Southern family and offers an inside look at what it means to be rich and famous as the women attend glamorous soirees and entertain celebrity friends. However, they also have their share of personal problems to deal with, including romantic and financial woe

On tonight’s episode as per the WE synopsis, “a reality series about three African American sisters from a prominent Southern family begins with an introduction to Ellen, Ione and Ruby Rucker, who live the high-society life, but also face their share of problems, including romantic and financial.”

Don’t forget to join us for our live recap tonight at 10:00pm when Love Thy Sister season 1 premiere that airs on WE. While you wait for the recap, let us know what you think of Love Thy Sister.

Ellen is married to Bakari, a politician and lawyer with whom she is in a long distance relationship. She has a child with Vince Carter, whom she divorced five years ago. She is at a crossroads in her life because she and Bakari are heading toward marriage but she has her doubts; Bakari is eight years younger than she is.

In the kitchen, she looks at his phone to see it has a password. He says he has a password on all of his devices, and he has work stuff that is private. She tells him she doesn’t have a password, and he says they just live two different lives. He says he is an open book, and anything she doesn’t know about him she can Google.

At lunch, she is still upset about Bakari, but isn’t going to tell Ruby about it because she thinks she is judgmental. She does tell them that he is asking her to dress more conservatively when they notice that she is wearing a modest dress.
The two other sisters are trying to find a good suitor for Ione, who doesn’t give anyone a chance.

Bakari comes home hours late, and says he had to work late. While being confronted, he answers the phone to talk to a woman, speaking cryptically. When she asks who he is talking to, he says they will be training young people this weekend for his job. She asks if he is still going to the lake as planned, and he says this has to be done and he can’t make it. She says it sounded like a woman on the phone, and he says women do work with him and the call was important. She says he already came home hours late and now a woman is calling him in the middle of the night.

When the women meet up again to eat, Ruby brings her children. Her daughter uses the word bitch, and Ellen is upset that Ruby is allowing her daughter to use such inappropriate language. Ione asks her what will happen if the kids curse at church or something, and Ruby says they know not to curse at church. Ruby says she loves to curse, and she’d be a hypocrite if she didn’t allow her kids to curse. She calls herself a “new age parent.” Ruby says that a lot of things are different nowadays from how they used to be. Ellen says she doesn’t think that’s appropriate, and Ruby says they’ll have to agree to disagree.

Ruby arrives and asks her sisters why they told their mother she lets her children curse. She starts crying, saying Ellen wants to throw her 10-year-old child under the bus to look perfect. Ellen says that she would never run and tell their mother about that, but Ruby’s bad parenting skills just came up. Ruby says she would be spanking her daughter every single day if she wanted to raise her daughter the way their parents raised them, but she doesn’t want to break her child’s spirit. Ruby says they can’t make her look like the bad guy in order to look good.

Ellen calls Bakari repeatedly, and he ignores her. Then, her calls start going straight to voicemail. She calls Ione, and she says that it’s only one day and she is really jumping the gun.

Ellen then asks why he is sending her to voicemail, and Ione says that maybe he is busy. Ellen says that he could text her then. Ione says she asked her for advice and asks if she can finish, at which point Ellen says no and hangs up.

Everyone gets ready for their weekend trip at the lake house. Ione tells Ruby that Ellen isn’t really speaking much because she’s upset about Bakari.

In the car, Ellen calls Bakari and asks why he wasn’t taking her calls. Bakari says she knows how busy he is with work. She brings up a rule between them where they call before bed, and he says he fell asleep and doesn’t know what she wants from him. He says he has two jobs and she is trying to make their relationship a third. She says the rule is for safety purposes as well, and he laughs. Ellen asks him outright if he is cheating on her, and Ruby takes the phone away from her and tells him she is just being overly emotional and she loves him. She and Ione say yes when Ellen asks them if she is crazy. Ruby tells her that because of past relationships, she has developed trust issues, but Bakari has done nothing to make her distrust him. Ione tells her she needs to calm down because Bakari is ready to get married, and her kid is getting attached to him.

At the lake house, Ruby’s daughter finds a vibrating sex toy in Ione’s luggage and everyone mocks her.

When he comes over, the two of them hit it off and he asks her out on an adventurous date.

Ellen takes Ruby’s kids out when she goes on a shopping run, and when Riley is almost hit by a car, she cusses out the offender.

When they get back, Ellen is told Bakari is here. He asks her why she has so many issues and what is going on her mind. He says if she let him tell her what was going on, they wouldn’t have these problems, and that it seems like she starts drama because she wants it.