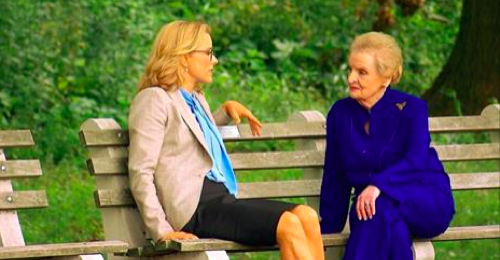 Tonight on CBS Madam Secretary airs with an all new Sunday October 11, season 2 Episode 2 called, “The Doability Doctrine.” and we have your weekly recap below. On tonight’s episode, Elizabeth (Téa Leoni) takes advice from former Secretary of State Madeleine Albright and ignores President Dalton’s (Keith Carradine) recommendation on how to negotiate the safe return of a Sate Department employee who was kidnapped in Afghanistan.

On the last episode, Elizabeth had to take the oath of office when the president’s plane disappeared over the Pacific Ocean in the Season 2 premiere. Meanwhile, Henry’s new Defense Intelligence Agency handler asked him to recruit one of his Russian students to work for the U.S. government. Did you watch the last episode? If you missed it, we have a full and detailed recap right here for you.

On tonight’s episode as per the CBS synopsis, “Elizabeth takes advice from former Secretary of State Madeleine Albright and ignores President Dalton’s recommendation on how to negotiate the safe return of a Sate Department employee who was kidnapped in Afghanistan. Meanwhile, Henry is having trouble persuading a student to spy for the U.S. government.”

Tonight’s episode of “Madam Secretary” kicks off in Afghanistan at a construction site. The manager of the construction site says goodbye to the last worker leaving and then heads in to one of the buildings, three men in black ski masks snatch him and drag him off kicking and screaming.

Meanwhile, back in the United States the media is in a frenzy over the Russian President, Pavel Ostrov – he seems to be MIA and hasn’t been spotted in public in over a week. Elizabeth, Henry and the kids are getting ready for the day. They argue over whether or not the Russian President is getting a tummy tuck or visiting a love child.

Elizabeth and Henry corner Stevie – they want to talk about the heroine that she was hiding for Harrison. They reveal that they stole hair from her hair brush and had it rug tested to make sure she wasn’t on drugs too. Elizabeth and Henry tells Stevie that Harrison needs to come clean to his parents about the heroine, or else they are going to tell on him themselves. Stevie is not happy, and snaps that they violated her trust.

Elizabeth heads to work and her team briefs her on the state employee that was kidnapped in Kabul – they have the security video footage of Tom Gharrety being kidnapped. Afterwards, Elizabeth has to get ready for her event with Secretary Albright – they are honoring Russia’s assistance with World War II. Jay storms in, he is not happy that he has to work with DOD and the Russians on a new policy. Elizabeth reassures him he is the best man for the job.

At work, Henry gets a visit in his office from Dmitri – the student he was supposed to be recruiting. Dmitri says that he has to drop out of school because his sister has cancer – Henry says he understands, compliments him on the recent paper he submitted. They say their goodbyes. Later Henry meets with his handler and tells her that Dmitri dropped out, she wants him to focus on Ivan again. Henry doesn’t like that idea.

A situation arises at the White House, Tom Garrety’s wife knows that something is going on because she hasn’t heard from her husband – she has been contacting the Embassy. Elizabeth tells Nadine to tell Tom’s wife the truth. Daisy got an email with a video from Tom’s kidnappers – they don’t want money or a prisoner exchange. They want Elizabeth to be in Kabul by midnight so that they can speak to her. The President reminds Elizabeth that they don’t “negotiate with terrorists” and she is not to fly to Afghanistan.

Henry has been trying to get a hold of Stevie all day – she skipped class and has been ignoring him since their huge fight over Harrison. He heads to Dmitri’s dorm room, he tells him that America will get his sister the finest medical treatment and a spot in a clinical test, if he “helps them out.” Dmitri is furious, he can’tbelieve that Henry is trying to recruit him as a spy. He lashes out and says that he would never betray his country, not even for his sister.

Elizabeth heads to the memorial ceremony, she takes Secretary Albright aside for some advice. She rants to her about Conrad hiring Craig Sterling – she is upset that they aren’t allowing her to travel to Kabul. Albright tells Elizabeth that she has to “fight hard and hit them where it hurts.” He is going to set up a lunch date with Conrad to discuss it.

Elizabeth pours over the security footage of Garrety being kidnapped. She realizes that Garrety knew his kidnappers – and they aren’t terrorists, they are actually Afghans that they hired years ago to work on their construction site. Elizabeth defies the President and Sterling’s orders, and she video chats with the kidnappers. She learns that the reason they kidnapped Garrety is because their children and wives are in danger. The US promised them they would protect their families, get the Visas, and move them to America. Now, the Taliban is threatening to kill their families. The kidnapper says that they can have Garrety back once they have their visas and their families are safe.

Elizabeth’s team pulls up the kidnappers’ requests for Visas. They were denied 7 times, even though they were obviously qualified for it. Apparently, the government has been lying to them and denying their visas for years. Elizabeth tracks down Colonel Wilkerson, the American officer who vouched for all of the kidnappers on their Visa applications. Elizabeth fills him in on the kidnapping – Wilkerson is shocked, but he still vouches for them and says that when they worked for him they were exemplary employees.

Elizabeth meets with the President and Sterling – Conrad agrees to the deal with the kidnappers, and Sterling is furious. They round of the kidnappers’ families and prepare to fly them to the US. They’ll give the families their visas and safety, but the kidnappers are getting arrested and doing prison time for the kidnapping. They locate the location where Garrety is being held – and they have soldiers en route, they will be there in two hours. The only problem is that there is a group of Taliban en route to the location too – and they will arrive in 2 hours as well.

Elizabeth brings Mike Wilkerson in to video chat with the kidnappers – he tells them that their families are safe but the Taliban is coming to get them. Mike is trying to tell the kidnappers to get to a safe location to be picked up, but they lose video signal. The American troops finally arrive, they are about to pick up Garretty and the kidnappers and the Taliban arrive and open fire on them. The soldiers are able to pick up Garretty, then the President orders the troops to back out. Elizabeth is furious that the President is leaving behind the kidnappers and not saving them from the Taliban – after they gave them their word. After the meeting, Sterling scoffs to Elizabeth, “Sorry things didn’t go your way.” She snaps at him that he better be prepared to have those men’s blood on his hands.

Stevie shows up for family dinner, and says she was ignoring everyone’s phone calls and texxts because she was “living her life.” Elizabeth tells Stevie that she has no control over her life anymore because she is an adult – and it scares the hell out of her. Henry isn’t ready to let it go though, he demands to know why she was isn’t in classes all day after they paid for her college. Stevie snaps that the reason she wasn’t in college was because she was busy taking the LSAT’s – Elizabeth laughs that she was having an identity crisis so she decided to take the LSAT. Henry and Elizabeth clean up the kitchen, Henry receives a phone call – the Russian foreign minister is paying them a visit. They’re not sue which one of them he is coming to visit though. He says that it is about his daughter Olga, she is at Harvard Business School – he just wants to make sure that if anything happens to him, Henry and Elizabeth will “keep a friendly eye on her.”

Before he leaves…the prime minister reveals that he is headed back to Moscow because the Russian president Ostrov is dead.