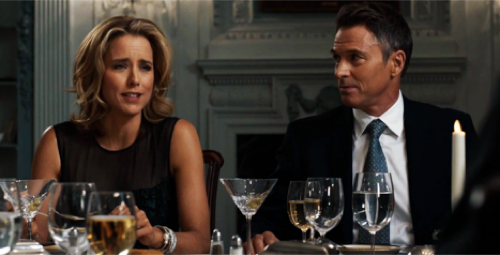 Tonight on CBS Madam Secretary airs with an all new Sunday November 1, season 2 Episode 5 called, “The Long Shot.” and we have your weekly recap below. On tonight’s episode, Elizabeth (Tea Leoni) and President Dalton (Keith Carradine) fear a power grab within the Russian government in the wake of President Ostrov’s death.

On the last episode, Elizabeth found herself pushed out of the president’s inner circle for disagreeing with his response to the growing tension with Russia; at the same time, she and Henry tried to protect Stevie from the media after incriminating photos of their daughter with Harrison surface. Did you watch the last episode? If you missed it, we have a full and detailed recap right here for you.

On tonight’s episode as per the CBS synopsis, “Elizabeth and President Dalton fear a power grab within the Russian government in the wake of President Ostrov’s death. Also of concern, especially for Cybersecurity Coordinator Oliver Shaw, is identifying the hacker who interfered with the communication system on Air Force One. Meanwhile, Jay devises a plan to fight Russian propaganda.”

Tonight’s episode of Madam Secretary kicks off with Anton Gorev in England, he has been exiled from Russia since Maria Ostrov took over – and all of his funds have been frozen. He is stuck between a rock and a hard place and has been calling favors all day but no one will give him the time of day. He has one last person that he can call, he orders his minion to get him Elizabeth McCord on the phone.

Meanwhile, Elizabeth is at home getting ready for the day with Henry and the kids. Alison is whining because Stevie won’t drop Jason off at his school. Alison has to be to school early – because she joined the school paper, and she has scored her own fashion column. She wants Elizabeth to take her to the mall over the weekend to do research for her column. Elizabeth’s phone start going off, it’s Anton Gorev, she totally blows off Alison.

Elizabeth rushes to work and calls Anton Gorev – he explains to her that the Prime Minister is stepping down as temporary President, and Maria Ostrov has made a power grab and announced that she is running for president. Everyone in Russia is too scared to challenge her, but Anton plans on doing just that and thinks he has a chance of winning and becoming the new President. The only thing is, he needs his money, and he needs Elizabeth’s help getting his accounts unfrozen.

Jay has been working hard trying to come up with a plan to slow down Maria’s rise to power in Russia. He explains to Matt and Daisy that the Russian people are being brainwashed with false news reports that Ukraine is secretly planning to invade Russia and innocent Russians are being killed in the west. Jay has plan though – he wants to run popular American shows on another channel that will bring in viewers, and then afterwards air an accurate news broadcast so that Russians will at least have access to the truth and won’t be being fed propaganda. There is only one catch – they are on a very tight budget.

Head of Cyber Security, Oliver, briefs Elizabeth, Conrad, and the President on the Air Force Once attack. After nearly a month of work they were able to figure out who the hacker is – an infamous cyber terrorist named “Dash.” He has worked for Russia, China, and Iran in the past. He has no loyalties except for to the people writing him a check. They have no idea how to find “Dash,” but they have set some traps on the net hoping that Dash will try to hack in to the US security systems again, and they will be able to track him.

Afterwards Elizabeth tells Conrad and Craig about her phone call from Anton. Craig reminds the President that they have been down this road and didn’t end well before. Conrad hears out Elizabeth, and he agrees with her and tells her to reach out to the UK and see if they are willing to make some sort of deal to release Anton’s money. Meanwhile, Henry heads to the park to meet with Dmitri – he gives him a speech about trusting his gut instincts, and working with the US to help his country in the long run.

Back at her office, Elizabeth is shocked when the Ukranian President Mikhail “stops by” for lunch. Elizabeth asks him what brings him by, he says that Ukraine needs to become a NATO member ASAP. Elizabeth warns him that it takes over a year for a country to be brought in to NATO. Mikhail pleads with her, Ukrains needs protection NOW. As soon as Maria Ostrov is elected President of Russia – she will attack the Western Ukraine. Before Mikhail leaves, he begs Elizabeth to ask the President to fasttrack his NATO application.

Elizabeth meets with the Ambassador of the UK, she wants to know why they haven’t released Anton’s funds. The Ambassador explains that there are 138 other people who have sanctions as well – if they release his, then they have to release everyone else’s. Elizabeth comes up with a scheme, there is a wealthy Lord in England that hates Russia. And, Anton owns over $100 Million in property in England. She is gong to try and convince Anton to sell his land to the Lord, and the British Ambassador promises not to sanction the money Anton makes in the sale.

Meanwhile, Henry’s spy Dimitri heads to an event with a bunch of Russia ofiers. While they are all schmoozing and boozing – he asks some questions about Maria Ostrov and what they think her agenda will be once she takes over. Dimitri has a meltdown, he calls Henry and tells him that he drank too much and he “can’t do this.” Henry tells him to get himself together and get out of there – asap.

Back at the White House, Jay and Daisy are meeting with some producers from Hollywood.l Jay is trying to convince them to produce shows for the US to air in Russia – for free, as a contribution to their country’s cause. The Hollywood bigwigs aren’t really buying it. Jay gives them a speech about patriotism and how they may regret not helping the US out in the long run. These TV shows could help prevent a World War 3.

Henry picks Dimitri up and lectures him about “staying sharp.” Before Dimitri goes home to sober up – he shares one piece of interesting information with Henry. He over heard two men saying that they were going to pick up Anton’s daughter Olga and take her to live with Maria in Russia as leverage. Henry remembers his and Elizabeth’s promise to look over Olga, and he rushes to meet her at school and invites her to come stay at their house until she is safe. As they are leaving, Maria’s men show up for Olga – but they are too late.

Elizabeth hears from Henry that Olga is staying at their house for a few weeks. She rushes home – furious, she is afraid that what Henry did will mess up the deal she is trying to work out between Anton, England, and Conrad. She demands to know what is going on, but Henry can’t tell her about his work or Dimitri. He reminds her that they made a promise to Anton to look after Olga, and they have to do that. Elizabeth heads upstairs and tries to talk to Alison about her fashion column. She snaps at Elizabeth and says that nothing she does – Elizabeth ever notices. She shouts that she is going downstairs to talk to Olga, the stranger who is more interested in her than her mother.

Elizabeth calls Anton, they are stuck at an interpass right now. The President doesn’t want Elizabeth to help Anton get his money, until Anton promises to give the US all of Russia’s secrets. Of course, Anton is a diehard patriot and he says that is not an option. Elizabeth has another plan though – Russia hired “Dash” before, if he gives up the hacker’s identity, then she will help him get his money. The next day, Elizabeth heads to work and tells the President that the hacker’s name is “George Lasko,” she has Oliver working on tracing the routing numbers that the payment was sent to. The President is pleased with the information and tells Elizabeth to go ahead and close the deal Between Sir Richard and Anton so that he can have his money. But – it looks like Anton won’t be needing his money. While Elizabeth is meeting with the President, one of Anton’s own men shoots and kills him.

Later that night Elizabeth is at home with her family and Olga and she receives a phone call – she learns that Anton is dead. Elizabeth and Henry take Olga aside and break the news to her, that her dad is dead. The next day Dimiitr meets with Henry, he confesses that he heard something at the embassy dinner that he didn’t tell Henry. Dimitri reveals that the plan is all set, as soon as Maria Ostrov takes over – she will attack Western Ukraine. Back at Elizabeth’s house, Olga packs her bags – she announces she is going home to Russia to bury her father and there is nothing that they can say to get her to stay.

That night Elizabeth stays up sorting out her closet, she has been studying fashion to have a common interest with Alison. She feels horrible that she doesn’t even know her daughter. Elizabeth explains to Henry that she has neglected Alison because she is not a crisis. Henry comforts Elizabeth and convinces her to come back to bed. She gets called in to the office in the middle of the night – someone made an attack on Mikhail, his plane went down. Mikhail is still alive, he video chats with Elizabeth and the President and reveals that the plane’s computer shut down. Elizabeth and Conrad know that it was “dash” – and Maria Ostrov is the one who hired him. Maria Ostrov just tried to assassinate the Ukrainian President, the same day that she hired someone to kill Anton Gorev.