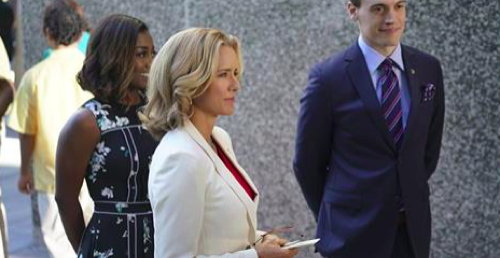 Tonight on CBS Madam Secretary airs with an all new Sunday November 15, season 2 episode 7 called, “You Say You Want a Revolution.” and we have your weekly recap below. On tonight’s episode, Elizabeth (Tea Leoni) has President Dalton’s (Keith Carradine) support when attempting to make history by lifting the Cuban trade embargo.

On the last episode, Elizabeth was out for justice after a U.S. aid worker was killed in Syria by the first known American ISIS leader. The death also prompted Elizabeth to recall all aid workers stationed in Syria, including her brother. Meanwhile, Henry felt conflicted when Dmitri asked for help saving Ivan, who had been called back to Moscow. Did you watch the last episode? If you missed it, we have a full and detailed recap right here for you.

On tonight’s episode as per the CBS synopsis, “Elizabeth has President Dalton’s support when attempting to make history by lifting the Cuban trade embargo. However, she faces a challenge in winning the Senate’s support. Meanwhile, Henry and Alison bond while touring Havana together.”

Tonight’s episode of Madam Secretary kicks off with a flashback to Chicago in 1977 – a man named Tre is pulled over by the police for a tailight. He panics and the passenger of his car pulls a handgun out and starts shooting at the cop. Tre, his passenger, and the cop are all shot – a woman in the backseat of the car is freaking out.

At the White House Elizabeth’s team is watching a press conference with the Prime Minister of Cuba – it’s the re-opening of the Cuban Embassy in DC, it’s a big deal. Matt rants about how Cuba supresses their people and is run by dictators, Elizabeth walks in and overhears him.

Elizabeth reminds him that she is going to Cuba in a few days, she thinks it is best if she writes her own speech – he obviously is not a fan of the Cubans. Elizabeth says that he can write her speech for the World Food Prize Lunch.

At the McCord house, Alison and Henry are fighting over her “car accident.” Elizabeth returns home and learns about the “accident” which was actually just her hitting her fender on a barricade while leaving the parking lot at the mall.

Alison took the car to the garage herself and paid for the damages. Henry is furious because she took pictures of the dent on her car and posted it on her social media accounts like it was a joke. Jason comes down and interrupts and asks her mom why Senator Markes is resigning – Elizabeth panics, she has no idea the Senator is quitting.

Elizabeth rushes back to the office where she learns from Nadine and Daisy that Senator Markes was pulled over going the wrong way down the highway, he failed a sobriety test, and he had a woman in his car that was not his wife – and had cocaine with her. Then, Markes actually tried to bribe the cop to let him go.

Elizabeth is thrilled, Blake is a little confused about what Markes has to do with them. Elizabeth explains that Markes was in charge of Foreign Policy, and he had vetoes a bill that they tried to pass last Spring. Now that Markes is out of the way, Elizabeth can try to get the embargo on Cuba lifted. She wants to announce it when she goes to Cuba for the embassy opening – which means that they have a grand total of 48 hours to get the embargo lifted.

Elizabeth heads to a meeting with Dalton, Jackson, and Craig. Craig wants to send a message to Russia after the attack on Ukrainian plane – he warns President Dalton that he needs to take a stand and prove that the US is a force to be reckoned with. Jackson advises against Craig’s plan – President Dalton thinks they should make a more civilized approach, he tells them to get him a phone call with Maria Otrov.

Elizabeth brings up the Cuban embargo – she says that now that Markes is gone, she only needs to get 60 votes from the Senators. She thinks that she might have the vote to get it through. Jackson agrees, reelection is coming up – and reopening trade with Cuba could definitely help them.

Craig disagrees and warns against it. President Dalton ignores Craig and tells Elizabeth and Jackson to try and get together the Senate votes. Back at Elizabeth’s office her team starts scurrying to get the Senates’ votes. Matt is upset, he can’t believe that the speech at the Cuban embassy is going to be such a huge part of history with the embargo vote – and Elizabeth isn’t letting him write it.

Elizabeth gets busy trying to round up votes, and it is easier said then done. It seems like every Senator has a favor they want before they will agree to vote. She even has to go as far as to convince the President to visit the national park in the state of Wyoming, before the Wyoming Senator will give up his vote.

Elizabeth heads back to her office – her daughter Alison is waiting for her. She announces that she is not going to Cuba with Elizabeth and Henry anymore. It was supposed to be quality time between the three of them, but now Alison doesn’t want to go because her dad is mad at her over the car accident.

Elizabeth doesn’t want to hear it – she explains to Alison that one of his students just committed suicide, she needs to be there for her dad, not fight with him. Elizabeth informs Alison she is going to Cuba – whether she liked it or not.

After work, Elizabeth and Jackson head to the bar to corner Thornquist – an Idaho Senator. Thornquist says that sugarbeets are Idaho’s biggest export, and he isn’t going to vote to lift the embargo on Cuba because they will be bringing sugar in to the United States.

Jackson blackmails Thorquist, he tells him that if he doesn’t vote to lift the embargo, then Jackson will make sure that the federal police start doing flyovers of Idaho’s pot fields – marijuana isn’t legal in Idaho yet, but it is already being exported to other states where it is legal. Thornquist has no choice, he grumbles that he will vote “yes” and storms out of the bar.

Elizabeth notices one of the Senators are holding a press conference on the TV in the bar – she tells Russell to turn it up. A Chicago Senator says that a woman named Afeni Rahim (from the flashback in the beginning of the show) was charged with murdering a Chicago Cop named John Burke in 1977.

Then, she fled police custody and ran off to Cuba where she has been hiding for the past 30 years. Burke’s widow gets up in front of the cameras – the Senator says that he is not voting to lift the embargo in Cuba until Cuba returns Afeni Rahim to the US, so that justice can be served in Burke’s murder.

Elizabeth’s team scrambles to get information on Afeni Rahim – they learn that she was born as Lisa Johnston, and when she went to the University Of Chicago where she was radicalized and joined the Black Panthers. After her conviction in 1977 she escaped from the courthouse bathroom and somehow made it to Cuba. The only thing is, the anti-war protestors in Cuba look at Afeni Rahim as a hero – and they aren’t going to give Afeni back up without a fight. En route to the airport, Elizabeth and Henry are discussing the Afeni situation – Henry thinks that Craig Sterling might be behind it.

Elizabeth arrives in Cuba – while she tries to get a meeting with the Cuban Vice President about Afeni, Alison and Henry kick off their vacation. Henry has arranged for an antique car them, he and Alison are going to spend the day touring. Elizabeth gets in to see the VP of Cuba – she tells him that they will remove the embargo as soon as Cuba hands over Afeni Rahim. The VP tells Elizabeth that is not an option.

Elizabeth and Daisy get ready for an appearance in Cuba – they are stuck in the car with Manuel (one of the Cuban) politicians. Apparently Manuel is eager to help his country and get the embargo lifted. He takes Elizabeth and Daisy to a small restaurant and reveals that the woman working there is Afeni. Elizabeth tries to convince her to come back to the US and serve the rest of her sentence. Afeni refuses, she says that she is innocent – she did not shoot Burke, the Chicago PD planted evidence on her. Back in the US, Nadine and Blake get to work reading through Afeni’s case file from 1977 to see if she really is innocent. Matt is busy on a mission of his own – he is determined to put together the perfect speech for Elizabeth to read when she lifts the embargo on Cuba.

Later that day pays Afeni a visit – they went through her case file, Elizabeth found proof that the evidence was tampered with. She and Daisy promise Afeni a retrial, and convince her that it will be publicized and could help her people in the battle against police racism. Daisy reminds Afeni that she isn’t going to be able to help the cause by working at a restaurant in Cuba – she needs to come home and face it head on.

Daisy and Elizabeth put Afeni on a plane to the US, and President Dalton signs the treaty to lift the Cuban Embargo. Matt arrives in Cuba, and he has brought along two former soldiers and a speech for Elizabeth to read as she announces the embargo being lifted – she and her team managed to pull it off, and President Dalton has made history.